Ledlie Laughlin, Jr. passed from this life early in the morning on January 21, 2019; at 88 years of age (the double-infinity image), by the light of the full moon, and on Martin Luther King, Jr. Day (which is also the birthday shared by my father and my daughter). His wife Roxana, and their three children, Ledlie, Jr., Becky, and Josh, were with him when he passed. A perfect day for his transition from this life to the next. 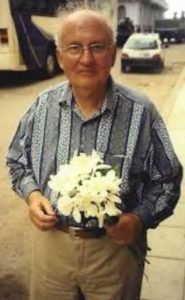 When I learned the Celebration of his Life would be held the next Sunday, January 27, I contacted our mutual cousin, Elizabeth, who lives in Queens, New York. We agreed that I would fly to New York and the four of us (her, me, her husband Fari, and their son, my godson) would drive up to Connecticut to honor Ledlie with his family and friends. Becky told me her father had asked that I share some memories with those gathered, which brought a big smile to my face. What follows are a few stories I shared, and a few I didn’t so I didn’t yammer on too long; stories I’m particularly fond of.

Traces of the Trade

Ledlie and I are 6th cousins, once removed. We met in 2001 when we both participated in the journey that would become the documentary film, Traces of the Trade: A Story from the Deep North, and my first book, Inheriting the Trade. We were roommates throughout filming in July and August that year in Rhode Island, Ghana, and Cuba. We became very close… despite his snoring like a chainsaw in desperate need of oil.

There was the night, after dinner at a local restaurant in Ghana, when Elizabeth tried to get Ledlie to dance with her. He resisted until the sound system began to play a song with the lyrics, “Shake that booty in the name of the Lord.” How could he resist? He’s a priest, after all. He danced with Elizabeth with the biggest smile on his face.

At the conclusion of filming each day in Ghana, Ledlie and I would sit at the bar in the hotel in Cape Coast and enjoy a glass of rum. We shared an affinity for good rum back then. We were the only two in the bar each night, except for the young woman who tended bar, and occasionally a colleague of hers. We talked, laughed, and wound down from the heaviness of each day’s excursions and discussions related to the slave trade.

The only serious argument we had came in Ghana after being in the dungeon at Cape Coast Castle; a dungeon where African men would be held for weeks to wait for a slave ship to take them away in shackles across the Middle Passage forever; a dungeon located directly beneath the first Anglican Church built in West Africa. Ledlie had retired a few years earlier from a long career as an Episcopal priest.

“How do you feel now,” I asked, “with that church sitting right above all those enslaved people in that disgusting dungeon?”

“It would’ve been worse had the priests not been there,” he quickly replied.

I was so angry I wanted to scream. The room we shared in the hotel had one bed. It was a king-sized waterbed frame with two, small twin bed mattresses inside. We slept that night like a couple who went to bed angry; butt to butt. The next morning, as I wrote in Inheriting the Trade, Ledlie said he wasn’t prepared for our confrontation; that he knew he came across as a bit defensive.

“But I need to come to terms with it. This is complicated, but I thank you.”

Ledlie was so open to facing his own “stuff,” his own racism and his privilege. He was such an inspiration, and a true moral centerpiece for our journey, and the film. In his honor, I wore a Guayabera shirt to the Celebration of his Life; a shirt I bought when we were together in Cuba during filming.

Several years ago, he recorded an audio version of my book, Inheriting the Trade for the Connecticut Library for the Blind and Physically Handicapped. I listened to Ledlie read as I flew across the country for his memorial service. He remained so alive and present as I listened to him read my words to me.

He and Roxana rented a small apartment for many years in Chelsea, a neighborhood in New York City, near The Church of St. Luke in the Fields, in Greenwich Village, where he once served as priest. I cherish our New York memories; of touring his church, and the seminary he attended, walking together in Central Park, visiting the private club where he was a member, where many artists and writers were members, drinking fancy rum, of course, before dinner. He spoke that night of his privilege, the level of wealth that allowed him to belong in this club, and that he wanted me to know about this part of his life as well as the rest of it; that he struggled with his own feelings about all of it. Ledlie was a contemplative man.

Elizabeth and Fari live in Queens, so we all met in the City several times over the years. Ledlie presided at their wedding on a beach in Massachusetts, and at the ceremony in their apartment where I became godfather to their baby boy.

Visits over the past decade have mostly been at their home in Connecticut. They live in a small town, really the tiniest of dots on the state map. A peaceful place of respite filled with long walks with their dog Corky, sledding in the snow in winter, learning about the making of homemade maple syrup, listening to the croaking of the frogs in the pond, and sharing stories.

I especially cherish our visits over the past couple years, visits when it appeared Ledlie didn’t know any of us; to hold his hand and tell him I love him. To witness the twinkle in his eye and that same voice saying hello. And I know without a doubt he was there… communicating differently, in a language I don’t know… and trusting he was with us at the celebration of his life in the church where he and Roxana were married six decades earlier, and at the reception in the nearby retreat center where I, and many others, shared stories of our times with Ledlie. Knowing that he was standing tall there – now among the ancestors – with that big Ledlie Laughlin smile on his face, enjoying all the nice things we shared about him… and not so much the mischievous side of him…

Like the time Ledlie and I went outside from our hotel room in Cuba late one night, to the beach, where we dropped our clothes on the sand and went skinny-dipping in the Caribbean Sea – him smoking a fine Cuban cigar… both of us with huge smiles on our faces… cherishing the profound journey we shared with our cousins. Standing naked in the dark, in the Caribbean, the vast ocean of stars twinkling above us. This may be my favorite memory of my adventures with Ledlie Laughlin…

See you on the other side, my friend, and my dear 6th cousin, once removed…