It’s a Wonderful Life: Pilgrimage to the real Bedford Falls 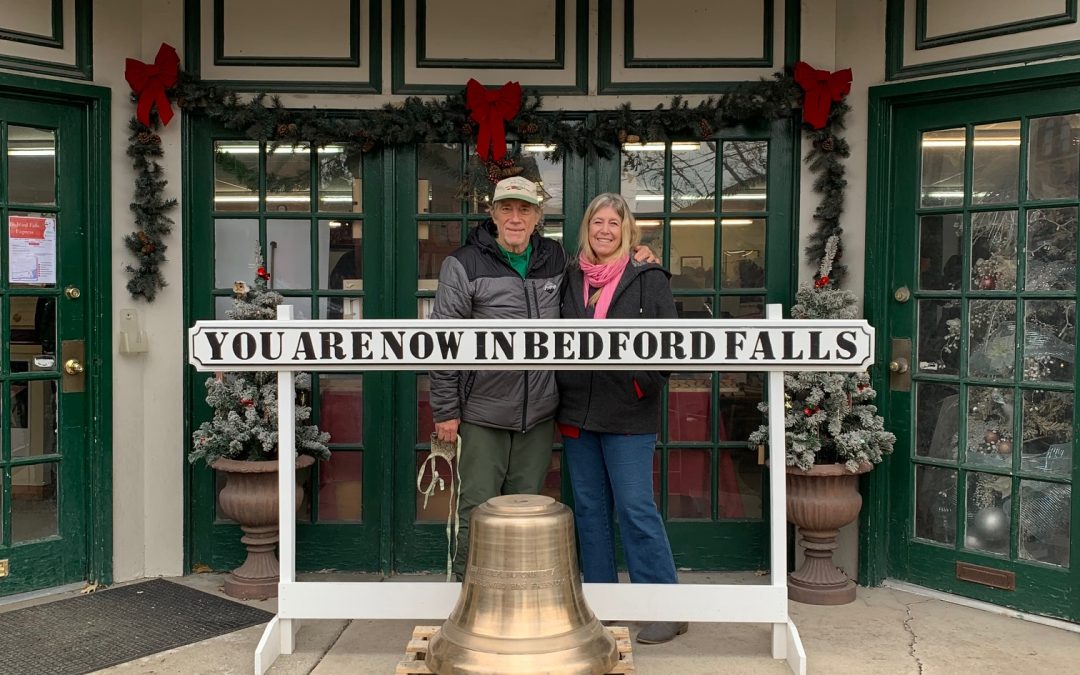 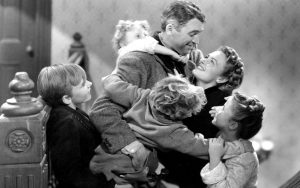 I’ve thought a lot, and read a lot, about “pilgrimage” over the past few years. I embarked on a huge pilgrimage in late 2019 when I walked 550 miles across Spain on the Camino de Santiago. I began to understand many experiences qualify as pilgrimage, depending upon one’s intentions. For me, a visit to the Baseball Hall of Fame a few years back with my friend Stephen Birchak, was definitely a pilgrimage. Going to Seneca Falls, NY in December 2021 was also a pilgrimage.

I’ve loved Frank Capra’s classic film, It’s a Wonderful Life, for as long as I can remember. I can’t tell you the first time I saw it, but my family has been watching it every year for probably half a century. When it was in the public domain, I bought my own 16mm copy so I could screen it every year at Pat & Mike’s Cinema & Restaurant, the cool joint downtown that my friend John Ellis and I owned and operated together for five years in the early 1980’s, and where I met my wife, Lindi. We didn’t charge admission for IAWL, and we packed the place every night for a week, every year. I remember vividly the moment on July 2, 1997 when I heard that Jimmy Stewart had died. I was driving home from Portland. I pulled over to the side of the road and cried. 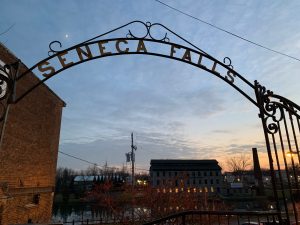 2021 is the 75th anniversary of the premier of IAWL. We found out about the 5-day celebration in Seneca Falls, New York, hosted by the It’s a Wonderful Life Museum, about a year ago and began making plans and reservations. We were a little nervous with the Covid Pandemic still raging, but trusted that our vaccinations, boosters, masks, and other precautions would keep us safe. Glad to report they did. 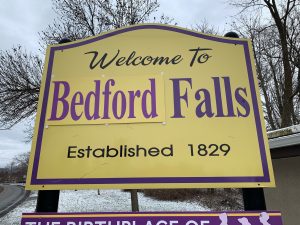 Why Seneca Falls? The town claims it provided Frank Capra with the inspiration that led to how Bedford Falls would look when being built on a soundstage in Culver City, California. He’d stopped in Seneca Falls for a haircut on his way to visit an aunt a few years before the film was made. There are multiple more “coincidences” that certainly convince me that Seneca Falls is the “real” Bedford Falls! Harry Smith, on the Today Show, agrees. Watch the segment shown on December 9, the second day of the Festival. You can also watch an interview with Jimmy Stewart’s daughter, Kelly Stewart Harcourt. 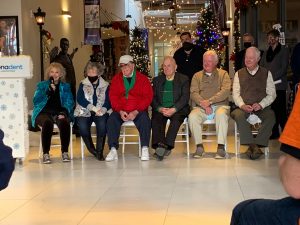 Featured guests for the festival included several of the child actors from the film, all of whom are in their 80’s now: Karolyn Grimes, who played Zuzu, Carol Coombs, Zuzu’s sister Janie, Jimmy Hawkins played Zuzu’s little brother Tommy Bailey, Michael Chapin was young George’s Friend on the sledding hill (Michael’s sister, Lauren Chapin, starred as “Kitten,” the youngest daughter in the TV series Father Knows Best), and twins Donald and Ronald Collins played Little Pete Bailey for a few seconds in a crib. Don and Ron still tease each other about who is actually pictured in the film. 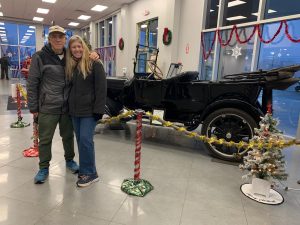 Lindi and me with “the” car!

We spent time listening to the actors and others reminisce and joke with each other. Jimmy Hawkins and Monica Capra Hodges shared memories.

We listened to Mary Owen talk about her mom, Donna Reed. She spoke of being taught to swim by Aunt Esther… who happened to be Esther Williams, a close friend of Donna’s. 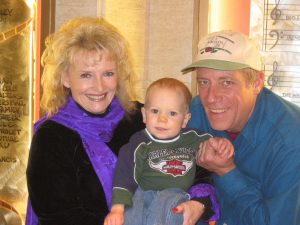 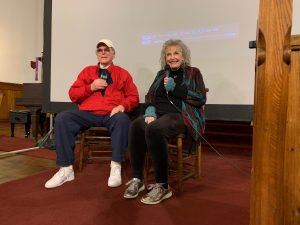 We listened to Jimmy Hawkins and Karolyn Grimes reminisce for about 45 minutes before watching IAWL on the big screen. I’d already spent time with Karolyn and her husband Chris. Karolyn helped us reopen the Tower Theater in 2004 after we’d taken an old, run-down theater and transformed it into a state-of-the-art community performing arts center that has been hosting movies, plays, music and myriad other events for almost 18 years now. Karolyn and Chris remembered the Tower very well. I brought a gift bag for Karolyn from the kind folks now running the Tower. Karolyn and Chris were very appreciative. We were in the second row this evening to listen to Karolyn and Jimmy. She saw me and spent the next five minutes talking about the Tower and what a wonderful venue it is and how Lindi and I came all the way from Bend, Oregon to be here. That moment was both humbling and very special.

Karolyn didn’t see IAWL until she was forty years old. She made sixteen films as a child, including Rio Grande with John Wayne and Maureen O’Hara, and The Bishop’s Wife with Cary Grant and Loretta Young, but her parents both died by the time she was 15, and she was shipped off to live with relatives in the Midwest who didn’t approve of Hollywood, so her career ended. Today, 80% of her life is devoted to IAWL, “So I see it a lot now!” 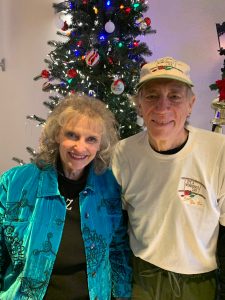 We watched documentaries and listened to stories about various aspects of making the film. All the presentations were held at the Episcopal Church across from the IAWL Museum. I haven’t spent that much time in church every day… ever. Our backs were definitely sore from the pews.

The final night featured the closing banquet. Lindi and I were seated at “Little Pete’s” table with the twins, Ron and Don Collins, and their wives, plus another couple from Long Island. What a treat to talk over dinner with these folks. We sang Christmas carols accompanied by Bert the Cop on accordion. We watched Michael Rohan as George Bailey one final time. He called Jeanine Roos, who played Little Violet in the film, who was unable to travel here this year. A mic was held to “George’s” phone as Little Violet said, “I send my best wishes. I love you all. Thanks for supporting the film!”

The next day, we flew to Maryland to visit our son, daughter-in-law, and three of our grandchildren. Of all our grandchildren, it’s been longest since we’ve seen these three, so we were thrilled to be there. While walking to the grocery store the morning after we arrived, I passed a sign that read, “Capra Financial Group.” Of course I had to check it out. A man was walking out the front door as I approached. He got in his car and I motioned to him. He rolled down his window. I asked if he was related to Frank Capra; that I’d just come from the IAWL Celebration.

He smiled and said Capra was a shortened version of a longer Italian name. But, he did grow up in Hollywood and his father worked with Frank Capra. He lived next to Dan Blocker and went to school with his son, Dirk. I told him how I’d worked on the film crew for Love at Large, a film Dan’s other son, David, produced.

Our conversation only lasted a couple minutes but made my whole day. As I walked away I thought about timing. Walking by, I saw the sign. I could’ve kept going and stopped on my way back, but I didn’t. Instead, I walked up as he was walking out. Living life as pilgrimage is wonderful like that when we pay attention.

Next up on my pilgrimage agenda is to visit both the Donna Reed Museum in Denison, Iowa, and the Jimmy Stewart Museum in Indiana, Pennsylvania. Scroll down for a few more photos of our time in the “real” Bedford Falls. 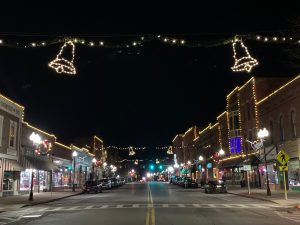 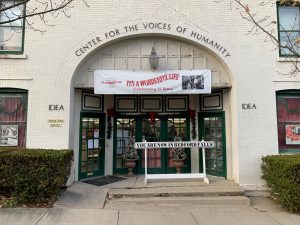 The It’s a Wonderful Life Museum 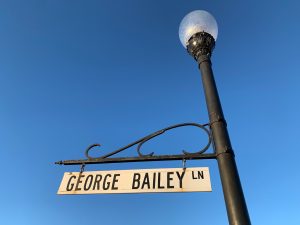 On the bridge… yes “that” bridge… 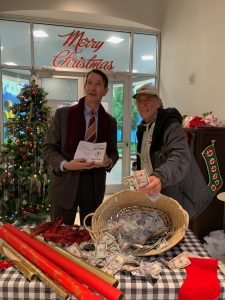 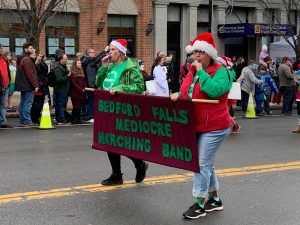 It wouldn’t be Christmas without a parade… and a Mediocre Marching Band! 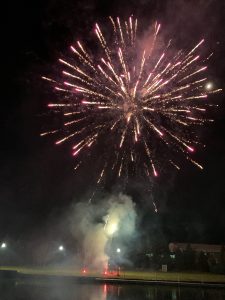 …and Fireworks over the bridge and river! 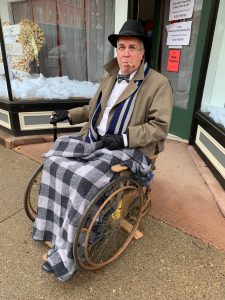 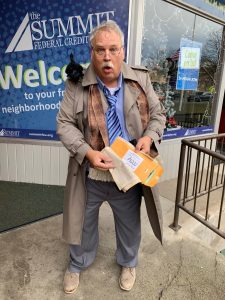 Actors dressed as characters from the film, including Uncle Billy… 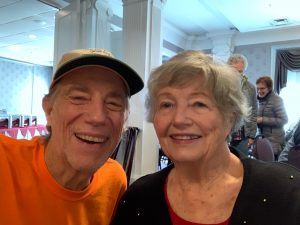 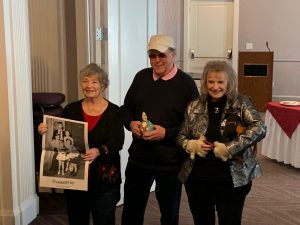 What a treat to spend time, and talk with, Carol Coombs, Jimmy Hawkins, and Karolyn Grimes 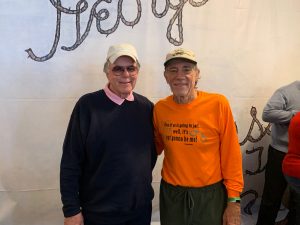 With Jimmy Hawkins, little Tommy Bailey (‘scuse me! ‘scuse me!) 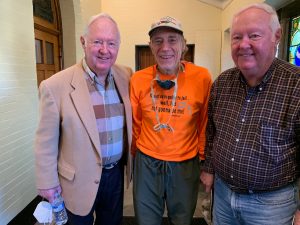 with Don and Ron Collins, Little Pete Bailey as a baby in a crib. 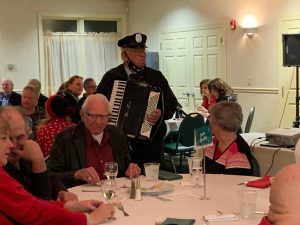 Bert the Cop leading us in singing Christmas Carols… 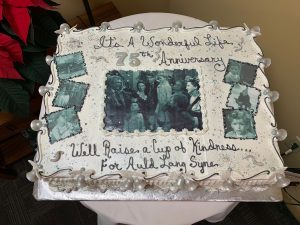 The amazing cake at the Closing Banquet… 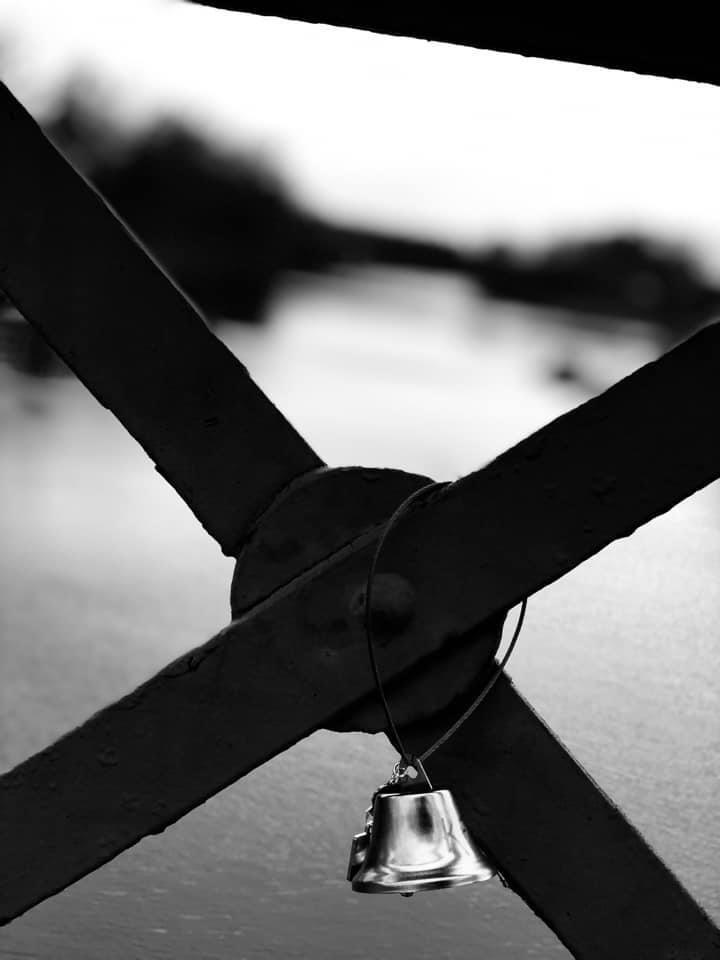 Every time a bell rings, and angel gets her wings…