Driving across town to take my 9-year old granddaughter to her piano lesson, we listened to a story on NPR about children being taken from their parents by American officials at the Mexican/U.S. border. Two young boys were taken from their mother in March and are still separated more than two months later. 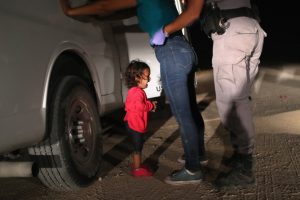 “They can’t do that,” my granddaughter said, looking at me with great concern on her face.

“But they do,” I said. “Hundreds of kids have been taken away from their moms and dads just in the past two weeks; kids younger than you. If you and your mom were Mexican, and crossed the border illegally right now, you would be taken away from her and put into a foster home.”

“That sucks.” She looked at me a little wary, because “sucks” is a bad word in our house. “Sorry,” she said.

“Because the president wants to be tough on people coming into this country without permission. But our government gives lots of money to corn farmers so they can grow lots of corn, which they sell in Mexico for less money than Mexican farmers can grow corn. So Mexican farmers lose their farms and many come to our country to help feed their families. Other people, like this woman, are coming here to be safe, because they were threatened or attacked by mean people in their own country. Now when they get stopped coming into the United States, they take their children away.”

“Can I use another bad word?”

“I guess it depends on the word.”

“I’m just gonna. They’re being jerks!” (another word on our ‘bad words’ list).

“Yes, they are, sweetheart.”

“People shouldn’t discriminate against other people just because they are from Mexico, or because their skin is a different color.”

She’s learning about racism and discrimination in school this year; in the 3rd grade. I don’t remember having talks like this when I was nine. Yet, we talk more and more about it at home, and while driving or going for walks. As discouraged as I sometimes get over injustice and trauma in the world, I appreciate the way this 9-year old ponders unfairness and injustice. As the story concludes on the radio, we pull up to her piano teacher’s house.

Before getting out of the car, she turns again to me and says, “When will those boys be back with their mom?”