Political affiliations are irrelevant to what I am about to share. The impact of what happened last night at the Democratic National Convention goes far beyond politics. Please read on…

When Alicia Keys’ performance closed out the Democratic Convention in Philadelphia Tuesday night, her final song led into a live video feed. My 7-year old granddaughter was sitting on my lap. Together we watched my computer screen. The faces of the previous Presidents of the United States were shown one by one all the way through Barack Obama. Then the sounds and visuals of glass shattering gave way to Hillary Clinton.

“Yes it is, sweetheart. Keep watching.”

“And,” says Clinton toward the end, “if there are any little girls out there who stayed up late to watch, let me just say. I may become the first woman president, but one of you is next.”

I swear she spoke those words and sat taller in my lap as she did so. Tears welled up in my eyes. The video concluded a few seconds later as the camera zoomed out to show a little girl standing next to Hillary.

“Do you know what a glass ceiling is?” I asked. She held her hands over her head and pretended to smack up against a ceiling. “We’ve never had a woman president before.”

“Nope. Only men. A glass ceiling is something you can’t really see but it keeps people from climbing as high as they can. Glass ceilings hurt people.”

“No. What I mean is you know how men are in charge of most things?”

“And men make more money than women do. Boys and men get to do more stuff than girls and women do. When there are barriers or blocks that make things unfair against girls, they call that a glass ceiling.  The same thing happens when white people have more advantages than people of color. Remember when we talked about that?”

“No. And now Hillary Clinton is the first woman ever to be nominated for President. That’s called breaking the glass ceiling because this barrier that keeps women unequal to men is being shattered. And if she wins the election in November she’ll be the first woman to be president. ”

“In the whole world?”

“No, just in this country. Other countries have had women presidents; just not here. So you can be president if you want to.”

“I don’t want to be president.”

“Good, because I don’t really want you to be either.” I tickled her and we laughed.

“I want to be a puppy walker so I can walk puppies and train them.”

“You’ll be the best puppy walker and trainer ever.”

I’m not sure she understands the whole “glass ceiling” concept; not sure I explained it very well. I remember when I was her age and my dad asked me what I wanted to be when I grew up. One of my choices was to become President. He told me if I worked hard enough 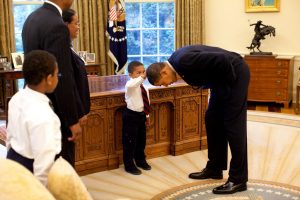 toward my dreams I could be anything I wanted to be. I believed him. What I didn’t understand at the time was that little black boys didn’t have the same dream as little white boys. All the presidents had been white men. They looked like me.

A few years ago this amazing, iconic photo was snapped. A little black boy wanted to know if the president’s hair felt like his. President Obama invited him to touch his hair. For the first time in American history, little black boys would more easily have the opportunity to share the dream of becoming president if they wanted to. Because now there had been a president who looked like them.

Vote for whoever you want. What happened last night is more important than politics. It takes us another giant leap toward realizing the ideals set out in our nation’s founding; ideals we’ve never lived up to and have struggled mightily to achieve.

I witnessed the beginning of that impact on a 7-year old girl last night; a girl whose whole life’s journey lies before her. A journey that may lead her to walk and train puppies, or to smash through and climb beyond any glass ceiling remaining to be shattered. She’ll know it’s possible because she watched it happen. And so will lots and lots of little girls all across our great nation.