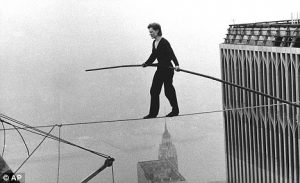 I feel a special connection to Phillipe Petit, the man who walked back and forth across a wire strung between the twin towers of the World Trade Center for almost an hour; some 1,350 feet above the ground in 1974. In 2008, the documentary film Man On Wire screened at the Newport International Film Festival in Rhode Island. I was there with many of my cousins with our film Traces of the Trade. When Petit was introduced after his film ended, he pretended to trip and fall walking on stage. His fake pratfall is one of my fondest memories from the festival. His extraordinary accomplishment left me in awe. His focus, not on cheating death, but fully living life… what an inspiration. Man on Wire went on to win the Oscar for Best Documentary of 2008.

Now comes the dramatic retelling of the same story in The Walk, with Joseph Gordon-Levitt as Petit. It’s brilliant! My heart pounded, my mouth went dry, I had to stand up because I just couldn’t stay seated as he walked back and forth, stopped, turned, stood, kneeled, and lay on his back on that thin cable so high above the ground for fifty minutes while police on both towers and in a helicopter above tried to coax him off.

Look, I knew how the episode ended. I met a very-alive Phillipe Petit in Newport 34 years later, but I feared for his safety. Dude is crazy for sure… crazy for life. He inspires me to live my life as fully… doing what I love because I love it. Check out The Walk. You’ll be inspired. 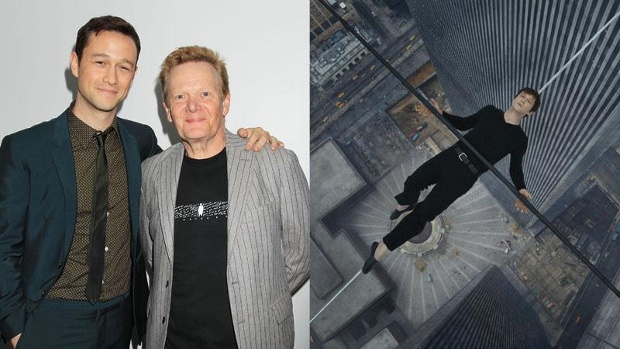