Dear “White” People, please read Between the World and Me 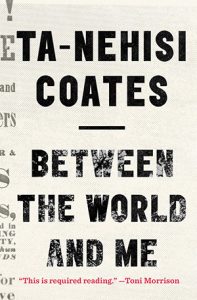 His June 2014 feature in The Atlantic, The Case for Reparations, and The Black Family in the Age of Mass Incarceration in October 2015, raised Coates high on my list of must-read writers. But Between the World and Me moved me like no other book has in a very long time. Laid bare within these 152 pages are truths of the difference between being “black” and “white” in the United States; the mortal threat to black bodies – male black bodies in particular. That the “American Dream” is a Dream by and for “white” people and a nightmare for “black” people. This is not how “white” people understand the Dream. We are raised to believe in the Dream; to seek and embrace it with enthusiasm and great effort. Also not obvious to those of us who believe we are “white” is the ultimate mortal danger that comes with the Dream to “white” people as well (though we are raised to be blind to that threat).

Between the World and Me, and my strong recommendation of it, isn’t about beating up on “white” people or making us feel guilty. It’s about remembering that which we are trained to forget. It’s about dealing with truth on a journey toward awareness; about breaking down barriers that continue to divide people from each other and from ourselves; from own humanity.

“The forgetting is habit, is yet another necessary component of the Dream. They have forgotten the scale of theft that enriched them in slavery; the terror that allowed them, for a century, to pilfer the vote; the segregationist policy that gave them their suburbs. They have forgotten, because to remember would tumble them out of the beautiful Dream and force them to live down here with us, down here in the world. I am convinced that the Dreamers, at least the Dreamers of today, would rather live white than live free. In the Dream they are Buck Rogers, Prince Aragorn, an entire race of Skywalkers. To awaken them is to reveal that they are an empire of humans and, like all empires of humans, are built on the destruction of the body. It is to stain their nobility, to make them vulnerable, fallible, breakable humans.”

Coates tells his son he doesn’t believe they can stop people like me; like those of us who believe we are “white”…

The first reaction of many “white” people to the message of Ta-Nehisi Coates is one of defensiveness; an opening statement that too often begins with something like, “Yeah, but…”

Please don’t succumb to the urge to argue, rationalize, or “Yeah, but…” without having first read Between the World and Me. By reading this harrowing, enlightening, and important work, I believe those of us who believe we are “white” will gain a new and critically important perspective on what it means to be “black” and what it means to be “white” in the United States of America today – and the roles we play in perpetuating injustice and mortal danger to us all.