Katrina Browne extended the official invitation to me in February 2001. I would join her and eight other distant cousins in a few months to retrace the Triangle Slave Trade route of our slave-trading ancestors from Rhode Island

to Ghana to Cuba and back. She would make a documentary film of our journey.

Without telling Katrina or anyone else connected to the film project, I decided to write a book about my experiences. I’ve wanted to be a writer since I was a teenager. I started the Great American Novel several times, wrote a children’s book, took a writing class here and there, but never seriously pursued writing with the passion I’d felt three decades earlier. And I never succeeded. But this was surely to be an adventure worthy of fulfilling that dream.

I first met Randall Platt in the late 1990’s at a Pacific Northwest Booksellers Association conference. Each time I attended a PNBA conference I attended as a retailer (we sold comic books and graphic novels, and rented audio books, at our family’s video store). I waited in lines to meet authors, to have them sign my copy of their book. I dreamed of one day being “on the other side of the table” like them. Randi had written several books, including the humorous Fe-As-Ko series of novels. My personal favorite was The 1898 Base-ball Fe-As-Ko. I signed up for her mailing list.

I know without question it was no coincidence that my invitation from Katrina was followed shortly by an announcement from Randi that she would be leading a weekend Writers Workshop in late March 2001 on the Oregon coast. I arrived at the hotel where the workshop took place wanting to soak in as much as I could to prepare for my journey a few months later. I was not disappointed. Randi proved to be a great teacher and facilitator. I shared my plans with her and the other attendees. She offered useful tips and strong encouragement. As I was leaving Sunday afternoon when the workshop concluded I thanked Randi for a great weekend.

“What I’ve learned is really going to help,” I said (or something like that).

“I’m going to brag about you someday,” she replied (exactly).

Her comment stuck with me. Wouldn’t it you? When I returned home I typed her quote in a fancy font and printed it on nice paper, framed it, and hung it on my office wall. It hangs there to this day, above where I write. Randi’s words have inspired me for more than fourteen years.

And I haven’t seen her since. Until last week. 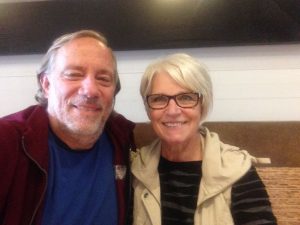 We’ve stayed in touch over the years via email and Facebook, but haven’t been in each others’ presence since 2001. Randi wrote me several weeks ago to let me know she would be in Central Oregon to participate in the Women Writing the West conference. We agreed to meet at a coffee shop in downtown Bend.

If I were writing a novel, this is the point at which I would describe an unexpected and dramatic wrinkle in our reunion. It might involve one of us being attacked by a dog at the door of the coffee shop, or another customer suffering a heart attack and Randi and I keeping the guy alive until the paramedics arrive, or we foil a robbery attempt. But no. We greeted each other with a warm embrace. She ordered coffee; me tea. We sat and talked for an hour and a half about writing; what we’re working on, the challenges we face, encounters with other authors we know. Just a couple writers who work hard at our craft and love what we do. The time flew by. And that’s it. She headed to the airport to pick up some friends and I rode my bicycle home. I’m certain it won’t be another 14 years before we get together again.

I also want encourage my readers to check out Randi’s books. I highly recommend her latest: Incommunicado. Set in a small, sleepy town on the Oregon coast in 1941, twelve-year old Jewels learns a lot about the people of her community, and herself, in the aftermath of the bombing of Pearl Harbor. She stands up for her beliefs as she helps and protects Tommy Kaye, her friend and local business man who is of Japanese descent, from internment or worse. It’s an engaging read and a powerful look at the dark side of patriotism, racism and fear and a young girl’s determination to do the right thing.

(And for any of my readers who may not know, Traces of the Trade premiered at the Sundance Film Festival in January 2008. My book, Inheriting the Trade, was published the same month.)