I remember the moment well. I was 14-years old. The 1968 Olympics in Mexico City were astounding. I was a fledgling long- and high-jumper in junior high school. When Bob Beamon broke the long jump world record – not by inches, but by almost two FEET – it became one of the most amazing moments in sports history; and certainly inspired this skinny, little, long jump aspirant. 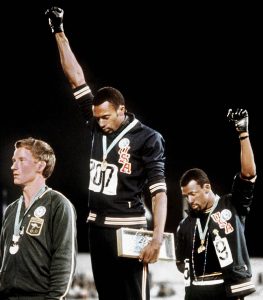 But that’s not the “I remember the moment well” I refer to in the paragraph above. The iconic moment that lives forever from the 1968 games is the medal awards ceremony for the men’s 200-meter race. Tommie Smith won gold. John Carlos, bronze. They stood on the podium with heads bowed and black-gloved hands raised high in an act of defiance to highlight, and protest against, racist injustice in the United States.

The white guy who won the silver medal? Who stands in front of them? That’s Peter Norman. He’s the Australian sprinter who won silver. What I never knew until I learned about it on Facebook, is on the left breast of his jacket he wore a small badge that read: “Olympic Project for Human Rights” – an organization set up a year earlier  to oppose to racism in sports.

Smith and Carlos were banned from the Olympics for life. But they became instant heroes in the black community for sacrificing personal glory for the greater good. History has also held them up as civil rights icons.

What isn’t well known in the United States is that Peter Norman became a pariah in Australia. Though his time in 1968 would have earned Gold in Munich in 1972, he was ostracized and never ran in the Olympics again. When Sydney hosted the Olympics in 2000, Norman – the greatest Olympic sprinter in Australian history – wasn’t invited to participate in any capacity. 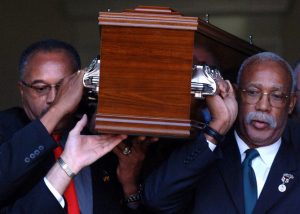 When he died of a heart attack in 2006, guess who eulogized him and helped carry his coffin? John Carlos and Tommie Smith.

“He paid the price. This was Peter Norman’s stand for human rights, not Peter Norman helping Tommie Smith and John Carlos out,” said Smith. “He just happened to be a white guy, an Australian white guy, between two black guys in the victory stand believing in the same thing.”

Here’s to Peter Norman. Thank you for standing tall for justice and freedom.