I first became seriously fascinated with deprivation tanks when I watched Altered States in 1980; the William Hurt/Blair Brown sci-fi, love story about a Harvard professor who drinks a spoonful of psychedelic mushroom juice from South America before slipping into the isolation tank to travel in his mind billions of years to the beginning of time; the birth of life.

Frightening and exciting, I wanted to float in one of those tanks; albeit without the drugs. It sounded like the ultimate meditation session; totally alone, the Universe and me. And I never did. There was a place in Portland, three hours away, that had a couple tanks but I never went.

Fast forward thirty-five years. I’ve received wonderfully healing and renewing deep tissue massage from Bonnie Snyder, LMT on and off for more than a decade. During my appointment in April she mentioned Float Central and how she floated for an hour and a half the day before she received a massage and what a difference it made.

That was it. No more procrastination. I called to make an appointment for the day before my May appointment with Bonnie. They no longer call them “deprivation” or “isolation” tanks. I guess they’re going for less claustrophobic terms nowadays. It’s just a float tank, which still removes all external stimulation, including light, sound, gravity and pressure points, from your mind and body. Physically, float therapy has been known to help relieve stress, anxiety, high blood pressure, and pain, and enhance healing from soreness or injury.

Me? I just wanted to float and meditate. An hour and a half seemed like a really long time. I usually meditate for more like a minute and a half and call it good.

I watched this introduction video the day before my appointment and then drove to Float Central the following morning.

The woman behind the counter explained that the huge stack of bags of Epsom salt in their lobby is what goes into the tank of water where I’ll be floating. No wonder you can’t sink! She explained the process and showed me to the tank room. After a cleansing shower I climbed in and closed the tank lid above me.

I settled in and began to breathe. Slowly in and slowly out. The video recommended I count my breaths; a good way to pass the time for my first float, I thought. I quickly calculated that when I got to 300 I would have been floating for about an hour. Other than counting, I tried not to think about anything outside of this moment; to just be here and see what comes up. I began with my standard morning meditation routine. I breathe slowly in and out, paying attention only to my breath.

Next I offer gratitude for people and things in my life for which I’m thankful. Then I visualize my dreams manifesting in my life. That seemed to take up about ten minutes. Then, I just breathed.

A lot of what I experienced was darkness and silence, which felt quite peaceful. The floating was easy; never the slightest concern that my face would sink beneath the surface. No fear at all. Images of owls began to appear, then wolves and dogs, then faces of people I did not recognize. It seemed as though they were people on the other side; ancestors who had passed offering me comfort. Colors in patterns appeared and shifted; bright and then dim, always slowly in motion.

Several times I realized I had breathed out but not back in. How long since I breathed in? A few seconds or ten minutes? I don’t know and it didn’t matter. More owls. More wolves. More ancestors. 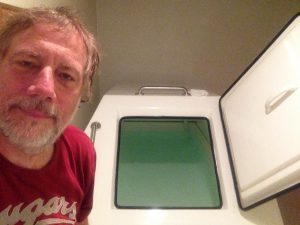 Music gently began to play when I reached the two-fifties. That’s not possible. I couldn’t have been in here more than about forty-five minutes. But sure enough, my ninety minutes had passed. I slowly climbed out of the tank and took a shower to wash off the salt. I felt more relaxed and at peace than I have in a very long time.

My appointment with Bonnie the following day made for a back-to-back gift to myself that felt relaxing, healing, and inspiring. The massage felt smoother somehow; not completely different, but different in the way I felt the pressure of her touch from time to time. I’ve scheduled the same back-to-back experience later this month. I look forward to spending more time with my owls and ancestors.

I highly recommend this experience for your whole self… your physical body and your inner spirit.

And if you haven’t seen it, check out Altered States. It’s a great flick; though if it seems like it may scare you away from float tanks for thirty-five years, go float instead.