Yes, Bill O’Reilly, there IS such a thing as White Privilege

or: “There are none so blind as those who refuse to see” 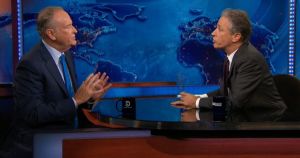 Jon Stewart asked a simple question of Bill O’Reilly on The Daily Show, on October 15, 2014. “Here’s all I want from you today. I want you to admit that there is such a thing as White Privilege.”

Mr. O’Reilly responded, “There is not.”

O’Reilly admitted to growing up in an all-white community, Levittown, in Long Island, NY, where World War II veterans – white veterans – were able to secure home loans through the G.I. Bill. Black veterans were not allowed to live in Levittown. O’Reilly acknowledged no residual disadvantages existing today for Black Americans as a result of conditions in existence six decades ago (let alone two centuries ago).

But as was pointed out in “This is what the legacy of ‘white privilege’ looks like in Bill O’Reilly’s hometown” in the Washington Post,

“Levittown was a place where young veterans and blue-collar workers became homeowners for the first time, where they needed no down payment to pick out one of the $7,990 homes — appliances and manicured yards included. The exclusion of blacks from this community 60 years ago is relevant today not because of some compounding, inter-generational deficit of values, but because Levittown represents the moment and the place where the families of white World War II veterans were given the chance to start building wealth, while the families of black veterans were not.

“Their economic prospects diverged dramatically at that point, in ways that persist today. Now, the wealth gap in America is much wider than the income gap, and home ownership has a lot to do with that.”

Bill O’Reilly was clearly not in the audience when a group of black moms told a group of white moms about the “race talk.”

“In the aftermath of the killing of Michael Brown, an unarmed black teenager fatally shot by a white Ferguson, Missouri police officer, conversations about race in the St. Louis area have been loaded.

“Christi Griffin, the president of The Ethics Project, wanted this to be different. She wanted to invite mothers of other races to hear directly from black mothers the reality of raising a black son in America. She wanted them to hear the words they each had said to their own sons, in different variations over the years, but all with the same message: Stay alive. Come home alive.

“She wanted mothers who had never felt the fear, every single time their son walked outside or drove a car, that he could possibly be killed to hear what that felt like.”

The problem isn’t that Bill O’Reilly is completely wrong; which he is. The problem is that, due to his influence, he’s dangerous. He says he has the most popular cable “news” show in the world. He’s probably right about that. And as long as he continues to reinforce ignorant, racist and harmful beliefs, he perpetuates the white privilege he claims doesn’t exist. And another generation of black moms will need to have the “race talk” with their sons for another generation.

Toward the end of the interview on The Daily Show, O’Reilly is being heckled by the crowd. He turns to them and says, “What are you, morons? I’m sittin’ here because I’m obnoxious, not because I’m white!”

Finally, something upon which we can partially agree.

What do you think?