Coming to the Table National Gathering 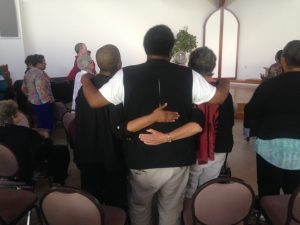 The National Gathering of Coming to the Table took place at Eastern Mennonite University during the Summer Peacebuilding Institute May 23-25. An article about the gathering, “Desire to address, heal, traumatic legacy of U.S. slavery sparks growth in Coming to the Table group“, shares the heart of what we hoped participants would experience.

At the 2014 annual meeting of Coming to the Table, two participants read emotionally charged poems that they exchanged after learning they were descended from the same plantation in Missouri. During one discussion, a participant of European origins shared her suspicions that the systematic abuse in her family was a legacy of the psychological impact of owning slaves.

More than 150 years after the end of slavery, the historical trauma of a system that turned people into property remains throughout the nation. It’s a trauma that members of Coming to the Table are trying to address…

My writing partner Sharon Morgan and I both served on the Planning and Facilitation Committee for the Gathering. We were pleased that we were filled to capacity and that participants were deeply engaged and satisfied with the experience.