The Most Important Journey of Cheryl Strayed, Author of Wild 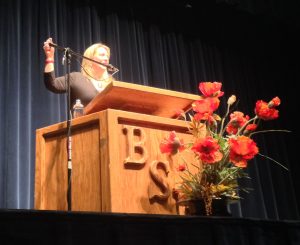 I had the pleasure of being in the audience to listen to Cheryl Strayed in Bend, Oregon last night. Her appearance was part of the Deschutes Public Library Foundation’s Author! Author! series. After having spent so much of my time since Gather at the Table was published in October 2012 speaking to audiences across the country at schools, churches, museums, and other venues, it was fun and inspiring to listen to another author – particularly one for whom I have such high respect.

I read Wild shortly after it was published. To be precise, I listened to it on audiobook. I loved it so much that I then bought it in hardcover. Her story of hiking the Pacific Crest Trail is of particular interest to me. The summer after I graduated from high school, three friends and I backpacked through the John Muir Trail from the base of Mt. Whitney to Yosemite; some 221 miles of the PCT. I dreamed of someday hiking the entire PCT from the border of Mexico to Canada, but it never happened. So what a treat it was to re-imagine my dream hike through Ms. Strayed’s wonderful memoir.

When it was announced that portions of the movie Wild would be filmed near Bend, I wanted to be part of it. Though I was almost 20 years older than the age of extras they were looking for, I hadn’t cut my hair for awhile so I fit the “scruffy” description pretty well. I took a “selfie” with a pine tree in the background and submitted my application. They hired me to be a “hiker” out near Paulina Lake Lodge, which was “dressed” to double for Kennedy Meadows near Sonora, California. I spent a day hanging out with the other “extras” and crew and, yes, the star and producer of the film, Reese Witherspoon; a pleasant and down-to-earth woman who wanted everyone on the set to be comfortable around her. We were.

I was excited when I learned many months ago that Ms. Strayed would be speaking in our town. I bought my ticket early on, and good thing I did.  The auditorium was packed; the first sold-out performance in the Author! Author! series. I arrived early and found a seat in the front row.

Listening to her talk about the death of her mother at age 45, her resulting tailspin into unhealthy choices in the use of drugs and sex to cope, and her decision to hike the PCT though she’d never done more than day hikes before, was by turns funny, sad, and compelling. Cheryl pointed out the most important journey was not the hike itself but the inner journey she was on; that her goal as a memoirist was to explore what it means to be human in such a way that readers bring their own stories into her story. This is the goal of every writer… to connect with readers on a human, visceral level. Cheryl Strayed did so in Wild, and she did so in person last night. And what a dream tale it was about how Reese Witherspoon read the manuscript over a weekend several months before Wild was published it, called and spoke with Cheryl for more than an hour, and immediately optioned the book for a movie- with the pledge that the film would be true to the book.

I donated extra in order to be invited to the private reception with the author after the main event. It was at the reception that I met and spoke with Cheryl Strayed, gave her a gift of Gather at the Table as my way of thanking her for inspiring me so. And though on-set protocol did not allow for a “selfie” with Ms. Witherspoon last fall, Ms. Strayed was happy to pose with me last night.

As someone who travels the country speaking to audiences in the hope that they will want to read and be moved by my stories, Cheryl Strayed’s success in getting her books into the hands of millions of people is a big inspiration to someone like me whose books have so far been read by thousands. Whether or not I ever write a bestseller,  Cheryl Strayed inspires me to continue to explore what it means to be human and to connect with my readers as I have connected with Wild.