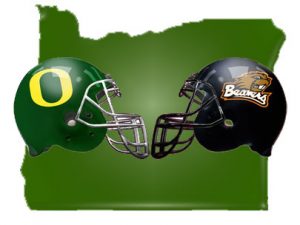 This Friday’s game isn’t just about winning a football game. Oh, no… I can’t recall a desire to beat Oregon State more intensely than I feel this season.

This is the 119th anniversary of the “Civil War,” the somewhat unfortunate name bestowed upon the 7th most played college football rivalry in the United States (don’t ask me what the other 6 are – you can Google it yourself): The Oregon Ducks versus the Oregon State Beavers.

We take this rivalry pretty seriously here in Oregon; though for the most part it is a friendly rivalry. As a graduate of the University of Oregon, I wear a lot of green and yellow and write “Go Ducks” and “Win the Day” on my Facebook page regularly. I can’t tell you the name of a single player for the Beavs.

We Ducks fans held high hopes for our team this year. We felt we had a legitimate shot at playing in the national championship game; that our quarterback, Marcus Mariota, was a legitimate contender for the Heisman Trophy.

Then we lost to Stanford and our Title hopes were dashed, as was Mariota’s Heisman chance.

Then we lost to Arizona and our Pac-12 Championship hopes were dashed.

What remains is one final regular season game: The Civil War.

This game is personal!

It’s between me and the City of Corvallis and the heartless meter reader who gave me a ticket in September!

I call upon the Duck Side of the Force as I seek vengeance through football!

Just read the letter I wrote to the Municipal Court for Corvallis below. Surely, if you have a heart and a brain and a modicum of compassion (which I do not anticipate from any of my Beaver friends), you will understand and support my position:

To Whom It May Concern,

Enclosed you will find a check for the $10 bail for a parking citation. I send these funds under protest.

I was visiting friends in Corvallis. I took my granddaughters (ages 4 & 6) into downtown Corvallis for lunch. We parked up the street from, and ate at, Nearly Normal’s. After lunch, it was pouring rain so instead of walking 2 blocks to the Frozen Yogurt shop for dessert we took our car and parked near Yogurt Extreme. I looked quickly at the meter and saw no notification about meters being monitored on weekends. But as I say, it was pouring rain and the meter was wet and hard to read through the glass. But it was not clear, and since it was Saturday – not a school day, not a work day, not a weekday – I ran with my granddaughters into Yogurt Extreme for a quick treat.

As you can see from the enclosed receipts, we paid for lunch at 12:39pm, then ate our lunch at Nearly Normal’s. We paid for our small-sized treats at Yogurt Extreme at 1:12pm, then ate them. We weren’t inside for more than a few minutes before returning to our car to find the parking ticket under my windshield wiper (timed at 1:17). The meter person was just driving away.

Point #1: If the City of Corvallis is going to monitor meters on weekends, you should find a way to be much clearer than you are about this policy.

Point #2: In my opinion, this policy is wrong-headed. I understand charging for parking during the work/school week when things are very busy in this area. On weekends I would suggest that you discourage consumers from patronizing businesses in the area by charging for parking; particularly when there are no meters just a block and a half away by Nearly Normal’s.

Point #3: It was pouring rain and I could not tell that I needed to take extra time to feed the meter. One would expect meter readers to take weather conditions into account at such times; that the City of Corvallis would have a little heart and not force meter readers to work in such adverse conditions. Though the meter reader would not have known that I had 2 small children under my care, that is the extenuating circumstance that impacted my choices on Saturday.

I request that you take these points into account and not charge me for this citation. Thank you for your consideration. 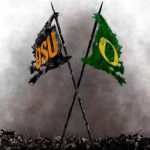 Did the fact that I have University of Oregon license plate holders and a Ducks logo trailer hitch protector and decals on my vehicle influence the meter reader? I do not know; though I have my strong suspicions!

So this year’s Civil War game is personal for me. I want an extra TEN DOLLAR’S WORTH of victory!

(Please note: I will return to my more-compassionate, less-competitive, thoughtful and loving self after Friday’s game)