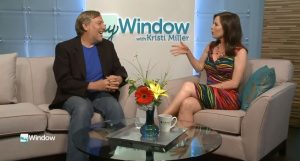 I recently participated in one of my favorite media interviews ever.

I don’t know how many times I’ve spoken with reporters over the years, but it’s been a lot. My close encounters with news microphones began in the late 1970’s when I managed, and then owned, movie theaters, video, comic book, and frozen yogurt shops; human interest stories, Darth Vader appearances, you get the picture. Free publicity by way of news stories is invaluable to a small business owner and I was not shy. When I ran for city council in 1991, and began a 14-year spate of involvement in local politics and statewide arts advocacy, the frequency of interviews increased.

When my first book, Inheriting the Trade, was published, and the documentary Traces of the Trade both came out in January 2008, media requests began to come from around the country. As an author, being on The Early Show on CBS in connection with my first book, and Melissa Harris Perry on MSNBC with my co-author Sharon Leslie Morgan for our recent book, Gather at the Table, were invaluable opportunities for spreading the word about our work.

So what was it about this particular interview?

It wasn’t to promote anything. It was more like finishing up the final chapter in a good book. Here’s the story: way back in January 1999, I had just been sworn in to my first term as a county commissioner. A local television interview program, “Good Morning, Central Oregon,” launched the same month. I was invited to be the first guest for the host, television newcomer Kristi Miller. The interview was to be “live” that morning, but things did not go as planned.

I was interviewed by Kristi many times over the years. I always enjoyed her upbeat approach to events and issues of interest to folks in Central Oregon. Fourteen and a half years after that first interview, I received a message from Kristi in early May telling me she was leaving her show and would I agree to be her very last guest. My answer was something like, “Duh, of course!”

I don’t know why Kristi is no longer hosting her show. I didn’t ask. It seems clear to me (though I don’t know) that this was not her choice. But Kristi is a class act and chooses not to discuss what happened. She has made this clear on her Facebook page. I have such high respect for her choice. There are times when things happen to us that are painful to go through and taking the high road of silence and discretion can be both challenging and right. I have great confidence that whatever Kristi chooses to do next, she will excel at it. And whoever benefits from her skills and enthusiasm will be lucky indeed. I will follow her new adventures with curiosity, enthusiasm, and great respect.

Kristi, on a personal note, thank you for allowing me to be your final interview on My Window. It was an honor to be your alpha and omega guest!