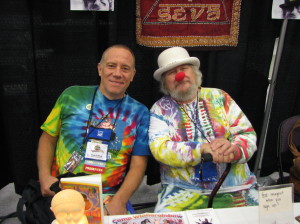 I met Wavy Gravy at an APCA (Association for the Promotion of Campus Activities) Conference on Halloween in 2010. We had a couple of warm and funny conversations and enjoyed watching Gallagher smashing watermelons and various other disgusting, juicy items together that weekend at the same conference.

I’ve been a fan of Wavy Gravy since his voice rang out regularly from my repeated playing of the Woodstock album in the early 1970’s: “What we have in mind is breakfast in bed for 400,000!”

I loved his book Something Good For a Change, which is now autographed with a hand-drawn labyrinth in the shape of a clown’s head.

That’s someone laughing their head off.

He’s been a clown for peace, has enriched the lives of untold numbers of children at Camp Winnarainbow, combatted preventable blindness in the Third world through the Seva Foundation, which he co-founded in 1978.

In honor of Wavy Gravy’s 77th birthday (May 15), I watched the Wavy Gravy movie, Saint Misbehavin’, which is WONDERFUL! One of the highlights of that memorable weekend two years ago was enjoying lunch with the film’s director, Michelle Esrick. For my friends in Central Oregon, I requested Deschutes Public Library to order the film. As soon as I return it, y’all can check it out… or better yet, buy a copy! I highly recommend it!

“Saint Misbehavin‘ is an unabashed love letter to the world that defies the cynicism of our age.” – Stephen Holden, New York Times

There are a whole lot of things wrong with our world. Wavy Gravy and his gifts to us all are not among them.

Happy Birthday, brother! May blessings flow to you in abundance in gratitude for all you’ve done for others.