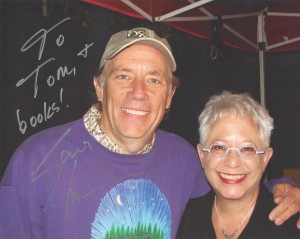 When I closed the cover after finishing Janis Ian’s autobiography, Society’s Child, I took a deep breath, sighed, and wished there were more. It was a walk through her life, and by extension, my own… a walk through the music and history of Janis Ian, other musicians I’ve listened to all my life, our country during the turbulent last half century as we’ve grown and changed our perceptions of each other in terms of race, gender, sexual identity and so much more.

I first saw Janis Ian in concert in the early 1980’s. My significant memory from that show was some guy shouting out, “Play Society’s Child! I insist!” Janis waved dismissively at him. She didn’t play the song; didn’t play it for years. Reading her autobiography, I now understand why.

I next saw her in concert in 2009 when she played with Joan Baez. I was thrilled to be Janis’s “front row guy” and wrote about the experience here. When my daughter Emily and I went to see Janis together recently at the Alberta Rose Theatre in Portland, I brought along the photo above of Janis and me taken after that 2009 show. And though I was already part way through reading Society’s Child, I bought the audio version at the concert. Hearing her stories again, in her voice, with her music accompanying them, will be a real treat. After all, she won the 2013 Grammy for “Best Spoken Word Album” when her competition was Bill Clinton, Michelle Obama, Ellen Degeneres, and Rachel Maddow, for crying out loud!

The way Janis described it, “There must be a joke in there somewhere. An ex-president, a first lady, and three lesbians walk into a bar…”

When we met in 2009 I gave Janis a copy of my book, Inheriting the Trade. When we spoke after the concert this time (Janis Ian is one of those artists that spends all the time it takes to speak with her fans after a show, to sign albums and books, to pose for photos), I reminded her of our last meeting and, this is a moment an author loves, she not only remembered my book. She read it and liked it. To top things off, we share a publisher! Her audio book and the audio version of Inheriting the Trade are both published by Brilliance Audio. Hence her signature on the photo above, “To Tom + books!”

Janis Ian hit it huge with her song Society’s Child in 1966 when she was 15 years old. She then faded into obscurity until the mid-1970’s when At Seventeen catapulted her back to worldwide fame. After several wildly successful albums, Janis walked away from the music business for a decade. She has lived through the ups and downs of the music industry, turbulent relationships, serious health challenges, and more. And since the early 90’s she’s been living life and making wonderful music on her own terms.

…I knew that until the day I died, my dream, and my talent, would always be with me. No one could take them away. It was up to me to make the most of them, in whatever time remained.

As someone who has struggled to find my “place” in the world through several disparate, so-called “careers” Janis Ian’s story gives me faith that doing what we know is our reason for living this life, my dream, and my talent, is ultimately the only way to truly live. She knows that her music has impacted lives in ways she can never know personally. She’s certainly impacted mine. Musicians, writers, artists of all stripes understand what Janis Ian speaks about in these quotes…

“There isn’t a person in America who doesn’t have at least one recording that dredges up vivid memories: their first kiss, their first dance. Music is there for them from cradle to grave, rocking their children to sleep, singing them onward when they die. We give voice to the voiceless, give them back a part of themselves they’ve forgotten. In hardship, we provide a memory of better times gone by – and better times to come.”

And here are a few photos from her April 5, 2013 concert in Portland, Oregon… and a most appropriate song from that show…

and…. the final song from that wonderful concert; the perfect sing-a-long…