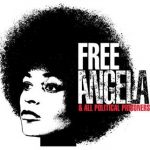 I can’t wait to see the film Free Angela & All Political Prisoners. The primary focus of the documentary is Davis’s infamous 1971 trial. She was arrested in 1970; charged with conspiracy, kidnapping, and murder following the failed attempt to free Black Panther George Jackson.

Read the review of the film in Village Voice.

If you live in Atlanta, Boston, Chicago, Washington DC, Detroit, Los Angeles, New York, Oakland, or Philadelphia, Free Angela opens in your city at an AMC Theater this Friday, April 5.

The rest of us may have to wait awhile. My hope is that folks in the above cities will FLOCK to Free Angela, so that it will receive the exposure it deserves.

The director of the film, Shola Lynch, previously made the acclaimed film Chilsolm ’72. 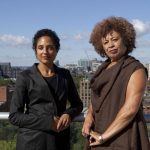 Caveat: my personal passion for Free Angela is that Shola is also the daughter-in-law of my writing partner for Gather at the Table, Sharon Morgan. Shola has been working on this film for several years. I know from my participation in the creation of Traces of the Trade just how challenging it is to complete documentary films. I haven’t seen Free Angela yet, but Sharon told me it is INCREDIBLE. She attended the premiere in New York along with producers Will and Jada Smith, Harry Belafonte, Ruby Dee, and, of course, Ms. Davis.

I am so proud and honored to be connected to this family. Go see Free Angela. Not only did Ms. Davis speak truth to power, she forced power to listen. We need her example to inspire us today to do the same.