“…it became clear to us that Al Jazeera was founded with the same goals we had for Current. Al Jazeera, like Current, believes that facts and tru th lead to a better understanding of the world around us.”

Al-Jazeera, the Arabic news network, has been much-maligned by American politicians and press for being the mouthpiece of Al-Qaeda and for having an anti-Israel and anti-America bias. A couple years ago I watched a terrific film. Before concluding that Middle East terrorists are taking over American news, I encourage my readers to check out Control Room, an unsettling documentary about this controversial news agency as well as about American reporting of the war in Iraq – from the inside. 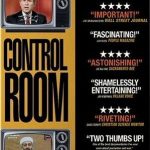 Director Jehame Noujaim had, frankly, unbelievable access to the inner workings of both Al-Jazeera and the U.S. military’s Central Command. At a time when no American news outlets were showing dead Iraqi civilians or dead American soldiers, Al-Jazeera did so–and was heavily criticized–believing it was their obligation to show the human cost of war. What most Americans don’t know is that Al-Jazeera has been vilified regularly in the Arab world for criticizing Arab governments.

Before watching Control Room I had a particular bias about Al-Jazeera. This movie definitely made me think–and reconsider my beliefs–not just about my own biases but about the biases inherent in all media.

One of the most powerful aspects of this film are the interviews with reporters and producers for the various news agencies. I was impressed not by how different they were but by how much they had in common. I sincerely believe that whether you consider yourself liberal, conservative, or somewhere in between, you’ll like this movie. And it will challenge your thinking.

I highly recommend Control Room. You can watch a preview, or the whole movie, right now, online… here.