Master of the Mountain: Thomas Jefferson and His Slaves, by Henry Wiencek

One week after Gather at the Table is released on October 9, another book will be published that I hope my readers will strongly consider picking up.

Master of the Mountain: Thomas Jefferson and His Slaves will be published on October 16. 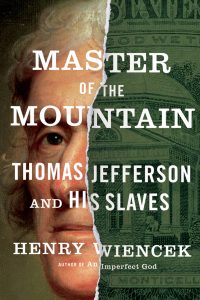 I first encountered author Henry Wiencek through my involvement with Coming to the Table. The co-founders of CTTT, Susan Hutchison and Will Hairston, were introduced to each other by Henry. His book The Hairstons: An American Family in Black and White tells the story of Will’s family, its long connection to slavery and its legacy in America. I couldn’t put the book down; particularly knowing I would soon meet several of the people Henry wrote about.

In January 2006, at the first Coming to the Table gathering in Harrisonburg, Virginia, Henry joined us as a panelist and a participant. By this time I had also read An Imperfect God: George Washington, His Slaves, and the Creation of America. Henry’s writing influenced my own. He skillfully and fearlessly examines the fullness of the people about whom he writes, including their flaws. Until recently, our nation’s “founding fathers” have been almost universally held up as models of liberty, justice, and truth; their larger-than-life images as solid as the marble from which their likenesses have been carved and put on display in Washington, D.C.

Such idolatry may serve mindless patriotism, but it does not serve the citizenry in becoming well-educated regarding the fullness of our past in order to assist in the quest to live up to the ideals established at our founding. Simply put, in order to fully understand America and its promise, we must understand the impact and legacy of slavery and racism.

I was honored when Henry wrote an endorsement quote that appears on the dust jacket my first book, Inheriting the Trade. I will miss being in Charlottesville on October 18 for his book launch event at the Jefferson Library, as Sharon and I will have been in Charlottesville (at the Thomas Jefferson Memorial Church UU) one week earlier, on the 10th. By the 18th we’ll be in Pennsylvania. I look forward with great anticipation to picking up a copy of Master of the Mountain to read along the road.

Richard Ben Cramer, author of What It Takes: The Way to the White House says,

Master of the Mountain is bound to cause a firestorm. It completely upends our view of Jefferson and his attitudes on freedom, slavery, and wealth. It’s a tough-minded book by a master craftsman, completely convincing and a joy to read.

A firestorm of thoughtful debate is just what our country needs. You can read an excerpt from Master of the Mountain in The Smithsonian Magazine.