Ecotopia: I’m pretty sure we’ve squandered our best opportunities, so now what? 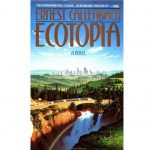 Ernest Callenbach self-published Ecotopia in 1975 after being rejected by 25 publishers. He died two months ago on April 16, 2012. The novel is the story of what happened when Washington, Oregon, and Northern California seceded from the United States in 1979 to create a society in balance between people and their environment. Set in 1999, Will Weston, a reporter from New York, becomes the first officially sanctioned American visitor to visit Ecotopia 20 years after secession.

It’s a fun read and a sad one. So much of what is described in Ecotopia would make such a positive difference in our world, but it just ain’t gonna happen naturally or easily. I rented the book from the library after reading Callenbach’s final essay that was published by TomDispatch.com after his death. He describes our world in dire terms; that we have indeed passed the tipping point. The next century is going to be exceedingly challenging. The essay opens:

As I survey my life, which is coming near its end, I want to set down a few thoughts that might be useful to those coming after. It will soon be time for me to give back to Gaia the nutrients that I have used during a long, busy, and happy life. I am not bitter or resentful at the approaching end; I have been one of the extraordinarily lucky ones. So it behooves me here to gather together some thoughts and attitudes that may prove useful in the dark times we are facing: a century or more of exceedingly difficult times.

How will those who survive manage it? What can we teach our friends, our children, our communities? Although we may not be capable of changing history, how can we equip ourselves to survive it?

I strongly encourage you to read the complete essay: Ernest Callenbach, Last Words to an America in Decline. Callenbach predicts dark times ahead. “Ecological devastation, political and economic collapse, irreconcilable ideological and religious conflict, poverty, famine: the end of the overshoot of cheap-oil-based consumer capitalist expansionism.”

Sounds a lot like the front page stories from current newspapers over the course of a few months’ time. Yet by the time I finished his essay, I found myself surprisingly optimistic. The deep damage that we have inflicted upon ourselves and our world has taken a long time and great effort. We will not heal ourselves quickly or easily. But we will heal. I have a hunch that Callenbach is correct:

We cannot know what threats we will face. But ingenuity against adversity is one of our species’ built-in resources. We cope, and faith in our coping capacity is perhaps our biggest resource of all.

We can deny what seems pretty obvious – that we’re in deep trouble here on earth – and hope that somebody makes sure that the future is okay. That feels quite naive to me. Or we can take steps to prepare, to care for each other and our planet better than we have been for the past few centuries. The cure is going to be painful. Much is going to change. Many of us will adapt. Many won’t. Evolution is no easy ride.

I hope that what we evolve into ends up looking a lot like Ecotopia.