I Confess: The Obama “birther” controversy is all my fault… 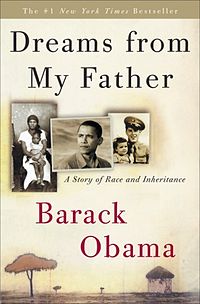 I remember the first time I walked into my literary agent’s office in New York City on March 2, 2007. The lobby was quite small. The walls were lined with book-filled shelves. A small table sat between two chairs in the corner where one particular book caught my eye. Dreams From My Father, by Barack Obama, sat right there staring up at me.

I asked my agent about it. She told me that, sure enough, they represented Obama for his first book. And they represented me for my first book. Hmm, I thinks to myself, Obama was a big name in the news right then. He had just announced his intention to seek the Democratic nomination for President a few weeks earlier. Though the agency did not represent either President Obama or me for our second books, he and I will forever be tied together by that small literary thread (no matter that he won’t return my calls about offering up an endorsement quote for Gather at the Table, I still consider that bit of serendipity a positive sign for my future as an author).

Unless, of course, I got tangled up in this “birther” mess. I paid close attention when I read about the recent kerfuffle “The Donald” has once again “Trumped” up regarding Obama’s birth certificate. Doesn’t he have something better to do with his time? Somebody should fire that guy.

Well… I hate to admit it. I really hate to admit it. But it turns out Trump may be right after all. And when the media machine understands the full scope of this conspiracy, yours truly may finally merit my own secret FBI file. So I’ve decided to do what no one else seems willing to do: I confess.

I’m ready to face the consequences; to Meet the Press, if you will, to appear on all the big news shows from Rachel Maddow to Bill O’Reilly, from Good Morning America to The Daily Show. I’m willing to face the news icon I fear most: Stephen Colbert. I’m even prepared to do a joint press conference with President Obama in which we admit our joint complicity in a conspiracy to dupe America.

Here’s what happened. A promotional booklet produced by Obama’s and my literary agency included the statement that he was “born in Kenya and raised in Indonesia and Hawaii.”

Yes, this is absolutely, undeniably, in point of actual fact, true. This is the smoking gun the “birther” conspirators have been looking for. President Obama’s and my former literary agency, and by extension, he and I, must now take full responsibility.

The conservative website Breitbart.com did the responsible thing and published a copy of the booklet. Trump turned up the volume on his “crazy” machine… er, sorry… I mean… Trump also did what any red-blooded American patriot would do and beat this dead horse just a few more times. And the news media, of course, is all over it.

I now humbly await that dreaded knock on the door from the FBI and/or the 60 Minutes news crew.

But wait! What is this? According to ABC News, Miriam Goderich, now a partner with Dystel & Goderich (in 1991 she was the agency assistant for Acton & Dystel – same agency, one changed partner) fact-checked the booklet. Aha! Gotcha! And what does Ms. Goderich have to say about the conspiracy of the century; the crime that will surely bring down the Obama Administration?

She says it was simply an error. “There was never any information given to us by Obama in any of his correspondence or other communications suggesting in any way that he was born in Kenya and not Hawaii. I hope you can communicate to your readers that this was a simple mistake and nothing more.”

A simple mistake? They missed one? Sort of the way that Mitt Romney’s folks missed one when he clinched the GOP nomination for President of “Amercia” yesterday? (I just ordered my “Dog Bless Amercia” bumper sticker… sorry, couldn’t resist). Well, folks, it appears the “birther” conspiracy is once again unraveling.

Oh, dang. You mean I won’t get caught up in this dastardly web after all? No FBI secret file? No Fox or MSNBC knocking down my door? Can I at least have a “Beer Summit” with the President and Trump to sort things out? Colbert? Can I at least get on The Colbert Report? No?

Well then, allow me to hop up and down indignantly on my high horse and bellow!

This whole issue is absurd!  It’s always been absurd! Worse yet, it’s racist! It’s the worst sort of political mud-slinging! The fact that right-wing conspiracy nuts keep harping on this got old a few years ago! The fact that news outlets continue to cover it is further proof of just how low they’ll stoop just to have an attention-getting headline! Shame on them all! Shame!!!

And the fact that an author who hardly anyone has heard of would try to connect himself to the whole conspiracy theory AND the President of the United States by the most tenuous of threads just to try to get more attention in advance of the publication of his next book?