If you think technology is isolating, you’re using it wrong 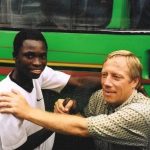 Eric was 16 years old when we met in Ghana in 2001 when we were filming Traces of the Trade. We became very close friends. I don’t think 2 weeks has gone by since then that we haven’t communicated via email. I had hoped to get back to Ghana by now to visit him, but it hasn’t happened. So Eric and I rely on technology. We talk via email and Facebook. We spoke by telephone one time a few years back, but it is SO expensive!

Yesterday, we succeeded in connecting via Skype. Though I’ve seen pictures of Eric, and he of me, over the years, this was the first time we saw each other “live” since 2001. It was an unexpected encounter. We’ve been trying to connect via Skype for a few weeks now but I’m not all that savvy when it comes to Skype. For whatever reasons, we just couldn’t get it to work. Then yesterday, bingo! We did something right and it just worked.

Neither of us really knew what to say. Mostly we just laughed at the thrill of being together on our computer screens even though 7 time zones separate us. The warm glow of seeing Eric, and hearing his voice, has not left my heart since.

I’ve read the stories about how technology has created more isolation among people. Though I acknowledge that being “plugged in” a lot can harm one’s relationships in the “unplugged” world, it doesn’t have to. People have always found ways to keep themselves from dealing with the challenges in their real-world lives. But don’t blame it on technology.

I just spoke with my friend in Ghana, face to face, through Skype. Until we are able to be together in person, it does not get any better than this!