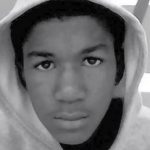 I cannot stop thinking about Trayvon Martin. I can’t stop looking into his eyes in this photo which has become ubiquitous online.

An unarmed, 17-year old boy in Florida walks to the store one night for some junk food. He’s shot to death because of the color of his skin. Oh, I know that some of my friends and others will take issue with that statement, because “damn, Tom, you’re always talking about race – it isn’t always about race.”

It’s pretty much only white people who would make such a statement. Of course this is about race; that Trayvon Martin was a young, black male wearing a “hoodie” – and George Zimmerman claimed that he felt threatened so he shot him in the chest. Now Trayvon is dead and his parents grieve over their child’s untimely and unjustified death.

Many have written powerful and eloquent statements about this case. Tim Wise wrote about the Unacceptable Burden of Blackness in America and how this was no terrible accident; but murder – because Trayvon was black. Marian Wright Edelman wrote Walking While Black; about how black parents must prepare their children for situations like this the best they can. Mia McKenzie wrote White Silence; about how her white friends become silent when she raises any issues dealing with race. The most devastating letter I’ve read is by Ajani Husbands: The Bullet Next Time – An Open Letter to My Unborn, Black Son.

I hope my friends – particularly my white friends – will read these articles and rather than think about reasons not to focus on race, will instead focus completely on race. Because race matters more than almost every white person I know thinks it does.

The huge gulf in life experience between Trayvon’s parents and me is encapsulated in the articles noted above by Marian Wright Edelman and Ajani Husbands. My children aren’t black. I’ve never had to talk with them about how they need to walk, talk, and act so they won’t seem like a threat. My race benefits me, my children, and my grandchildren in this profoundly significant way.

I spent this past weekend in Richmond, Virginia at the National Gathering of Coming to the Table – a group of people committed to creating “a just and truthful society that acknowledges and seeks to heal from the racial wounds of the past—from slavery and the many forms of racism it spawned.”

Traveling home from this amazing weekend, half a dozen of us were on the same flight out of Richmond; me, one white woman, and four women of color. After making it through security (I was the first of our group; I’m always the first – always in a rush to get through security), I learned that one of the women of color had left her identification at the check-in counter. After retrieving it she returned to a much longer security line. The others were closer to making it through. Ann would be awhile…

I sat down on a bench in the screening area waiting for my friends. After several minutes, a TSA official asked me what I was doing. I told him and he walked away. Thirty minutes later, still waiting for Ann, I now stood with three women of color. Another TSA official approached and told us that due to security reasons we were not allowed to wait in the screening area. We needed to wait for our friend beyond the rope barrier.

Why was there no “security reason” when a white man sat alone in the screening area but suddenly there is such a reason when that white man is in the company of three women of color?

I grieve today for Trayvon’s parents. My heart aches for their loss. As a father, there are few tragedies I can imagine that approach the severity of losing one’s child. I acknowledge that it can happen to anyone. But in my family, it won’t happen to my children because of the color of their skin.

This is the real tragedy of Trayvon Martin. This is the American Wound that remains unhealed.

Several years ago Bruce Springsteen caught a lot of grief for his song American Skin, written after the shooting death of Amadou Diallo in New York. Bruce played the song for the first time on his new tour just tonight in Tampa, Florida. As stated on Backstreets, “The performance was offered without comment, but it was patently obvious that the killing of Travyon Martin was the impetus for the song’s appearance, with this show the band’s only visit to Florida during the first leg of the tour.” Though Trayvon Martin was killed by a “wanna-be” and not a real police officer, the words of the song ring true once again.

Is it a knife?

Is it just skittles?

This is your life.

It ain’t no secret, no secret my friend. You get killed just for livin’ in your American Skin.

But only if you aren’t white.

(note: I inserted the word “Skittles” into the lyric excerpt in place of “a wallet” – which is what Diallo was carrying when he was killed)