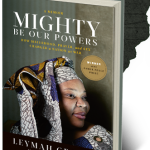 I wrote last October about the wisdom the Nobel committee displayed in their selection of three women as recipients of the most recent Peace Prize. One of the three, Leymah Gbowee, carries particular interest for me due to our mutual connection to Eastern Mennonite University. She earned a Masters degree there. I’ve taken several of the same courses she did, and EMU houses the group of which I’m part: Coming to the Table. I encourage my friends, colleagues, and readers to take the time to get to know more about this remarkable woman.

Pray the Devil Back to Hell is the award-winning documentary film about thousands of courageous Liberian women – moms, grandmothers, Muslims and Christians – who ended a civil war and brought peace to their traumatized country. At the center of the peace movement was Leymah Gbowee, single mother of four, poor, struggling, humble, and tired of the killing, the rapes, and the damaged children.

After watching the powerful film I checked her memoir out at our library: Mighty Be Our Powers: How Sisterhood, Prayer, and Sex Changed a Nation At War. This is a much more complete account of what is portrayed in the film with the added benefit of learning more about Leymah herself.

Ms. Gbowee lost countless friends and family members to the war. She was trapped in an abusive relationship with the father of her children. She was caught in a hopeless position; yet she turned that hopelessness into action. She helped to organize women into the Liberian Mass Action for Peace. She followed in the footsteps of Gandhi and King. She was moved by Gandhi’s words:

There may be tyrants and murderers, and for a time, they may seem invincible. But in the end, they always fail. Think of it: always.”

She marveled that God would call her to the work of peacebuilding. She was no Gandhi. She was considered a sinner by many fellow Christians because she gave birth to several children outside of marriage. She had an affair with a married man. She drank too much alcohol. Yet she persevered. She stood up to tyrants and murderers. She helped end a war.

What struck me most about the story of Leymah Gbowee is how much of a normal, every day kind of person she is and how forthcoming she is about her own human foibles and shortcomings. I’d have a hard time admitting in writing that my children counted the 14 glasses of wine I consumed one evening, how much time I spent away from them doing my work, and be so blunt in sharing other personal issues.

I know my children were angry at me. Later, when I asked if any of them wanted to grow up to be a peace-builder, Amber’s response was, ‘No. I want to stay home with my children.’

But if I ask, ‘Could I have done this differently?’ my answer is always no. I still don’t see what other options I had. I know many women who saw and went through a lot, with their children. Many of them didn’t make it. Either they succumbed to the misery of war violence or domestic violence and died, or they abandoned their children and ran. We stuck it out and survived.

Leymah Gbowee’s story is that of more than a survivor. Hers is the story of leadership in the face of unimaginable obstacles on virtually every level. It is inspiring and deeply thought-provoking. What matters in this world? What role is mine to play in stopping violence and terror; in building peace? Gbowee’s story – through both the film and her book – is remarkable. It will inspire all who dream of a better world. Hopefully it will also encourage and empower many to take action against injustice; to be peace-builders.