U.S. Postal Service: Priority Mail? Not so much…

I’m not prone to airing public complaints as I’m about to do in this column. Many of my friends jokingly (I hope) refer to me as “Mr. Kumbaya” for my upbeat and optimistic outlook on life. Now in one small, but important aspect of my business world, I have reached a level of frustration that inspires me to share a story…

I rely on the U.S. Postal Service. I have dear friends who have worked for decades for the postal service. I’ve had a post office box for decades. I use a wide variety of their services and have an active, online account. As an author, readers occasionally mail their personal copies of Inheriting the Trade to me so that I can sign it for them. I mail copies to others, including the media and other business colleagues. I exchange contracts and other important documents with colleges throughout the country through the mail. If the service breaks down, the consequences can be significant. Fortunately, I have not experienced problems that impacted my business. But the problems I’ve recently experienced in my personal life with the postal service has resulted in a change in how I do business with them. 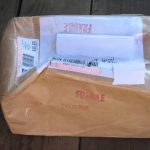 Late this summer I arranged for a fragile package to be mailed to me. It was prepared for normal shipment, wrapped so that glass items were separated and cushioned. As you can see from this photo, the box was either run over by a mail truck, kicked across a sorting facility in a game of soccer, or used for batting practice. When I picked up the package at the post office, small slivers of glass were spilling out of the ripped corner. I took it to the counter and set it down in front of one of the individuals working there.

“I haven’t opened this but it’s obvious that whatever’s inside has been crushed.”

First words out of the postal worker’s mouth: “It isn’t insured.”

Me: “But your people apparently dropped an anvil on this package.”

Her: “It isn’t insured and it obviously wasn’t packaged properly.”

Me: “But it is stamped ‘FRAGILE’ all over the place. Doesn’t that mean anything?”

On top of the disappointment in the loss and the inability to receive any satisfaction from the postal service, she didn’t even say she was sorry on behalf of her organization that the anniversary gift for my wife and me from a dear friend of ours had been destroyed. She simply spouted the company line and I had no recourse. (See more photos of the damage here)

Fast forward to the next chapter of the saga…. November. We shipped a birthday gift to my sister-in-law via first class mail. It was returned to us a week later because she moved and we hadn’t updated our records with her new address. The person who lives in her former house wrote her new address on the package along with “please forward”, but rather than delivering the package less than a mile away, they sent it 1,000 miles back to us for more postage. I re-sent the package via Priority Mail (2-3 day service) on December 14… I didn’t initially track the package; trusting that it would arrive when the Postal Service says it will.

It didn’t. And, it gets worse.

On December 19 I sent another Priority Mail package of Christmas gifts to my parents in Southern California as well as a business-related Priority Mail package to a colleague in Virginia. I checked that day on my sister-in-law’s birthday gift and it had not yet arrived. It was delivered 7 days after we mailed it. It was at this point that I began researching online to see if I could get a refund on the Priority Mail expense. I found nothing on the page that explains the various services the post office offers; nothing on the next page focused on Priority Mail; nothing in “rules and restrictions.” All I found was several statements touting their 2-3 day service. It was later that I would learn that there are no guarantees with Priority Mail. 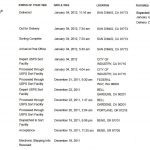 The saga of my family’s Christmas gifts is a long and tortured one. As you can see from the photo here (if you click on it, it will enlarge), we mailed the package on December 19. When I originally checked online it was scheduled for delivery on December 21. It was processed through Portland on the 20th. But then it wasn’t processed through the sort facility in Bell Gardens, California until the 23rd. I still held out hope that it would arrive by Christmas Eve when my sister’s family would join my parents to celebrate the holiday!

But alas, nothing changed online until January. Through December 31, the online report still said it was in Bell Gardens with an expected delivery date of December 21. I went to my post office on December 30. It happened that the Postmaster was there at the time so it felt like everything would really get resolved now. They faxed all my notes and the Track & Confirm printout I brought with me to the key person at the main post office who would get to the bottom of things…

Side note: On December 22, I mailed four more packages. Three were mailed first class. One was sent via media mail; which typically takes 7-10 days. All arrived at their destinations (including one to Virginia and one to Baltimore) in just a few days — right around Christmas, no less!

Back to December 30: I was told by the key person at the main post office that he did not have access to phone numbers for post offices outside our region so he could not contact Bell Gardens. I relayed the message I’d received from the Postmaster that he could. I don’t know what happened at that point; whether he was able to contact Bell Gardens or not. Because… Ta Da!… on January 2nd, all of a sudden, the online report says the package had left Bell Gardens and was processed through Federal Way, Washington. It was back in the Northwest!

I called the key person at the main post office to ask what was going on. He assured me that this was good news. The package was being returned to me. The probable cause was that my parent’s address had been damaged somehow so as to be unreadable. But at least the return address was still legible. Sounds plausible, eh?

Except on January 4, it shows up back in Southern California, only in Industry this time. So the package is now 20 miles from my parents’ home instead of 30 miles away in Bell Gardens. And…….. it is finally delivered. Priority Mail that is advertised for delivery within 2-3 days, took 17.

I went back to my post office, knowing in advance what I would probably hear. I was told that the only service that is guaranteed is Express Mail, and there is nothing she could do. I expressed my frustration that they don’t explain the lack of guarantee online, and no one says anything at the counter about it — they just advertise 2-3 day delivery and then take no responsibility when it doesn’t happen. At least this time the woman behind the counter apologized and looked genuinely compassionate about my frustration.

I’ve read recently about the problems the Postal Service is having; that they’re in serious financial trouble and need to make big cuts and increase revenues. I can’t help but feel that some of their problems are self-imposed.

Now, I realize that my three recent incidents of lousy service are anecdotal. And they are not normal. I have typically received wonderful service from the post office and expect to — for the most part — in the future. But I have lost enough faith in their performance that my publisher and I have agreed that when it comes to sending galleys of Gather at the Table for my writing partner Sharon Morgan and I to review in both the copy editing and proof reading stages of the publication process this year — where time is of the essence — we’re going with FedEx.

I’m glad I have this online resource to communicate with my readers. Who knows when you’d receive this if I sent it via Priority Mail? And now that this moment of frustration and snarky commentary is off my chest I’m going back to being Mr. Kumbaya.