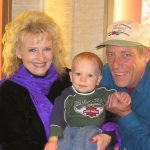 It’s a Wonderful Life. Really? Is it? There is so much evidence to the contrary.

When the Tower Theater reopened in early 2004 I made sure that one of our Grand Opening presentations was a screening of the 1946 Frank Capra classic It’s a Wonderful Life, starring Jimmy Stewart and Donna Reed as George and Mary Bailey. A little girl named Karolyn Grimes played their daughter Zuzu.

Ms. Grimes joined us for the sold-out film. She shared story after story prior to showing the movie about the making of IAWL, put huge smiles on our faces, and warmed the hearts of everyone at the Tower that night. Our family received the extra bonus of having dinner at the Pine Tavern with Karolyn and her husband. She graciously posed for a photo with me and my first grandchild, Seth.

One of the proudest experiences of my life was to participate for ten years with a group of friends and colleagues to raise sufficient funds to redesign a run-down, 50+ year-old movie theater into a state-of-the-art, multipurpose performing arts facility; a real gem that continues to thrive today in downtown Bend, Oregon. It felt like a little bit of Pottersville was transformed back into Bedford Falls.

My wife Lindi and I have watched It’s a Wonderful Life virtually every year of our 25-year marriage. Being reminded each December that no one is a failure who has friends, that, with all the challenges people face, this truly is a wonderful life, is a story worth seeing over and over again.

The life of Karolyn Grimes is a case in point. She faced obstacles as a child and young woman that could hardly be called “wonderful.” She was six years old when IAWL premiered. Over the course of her brief Hollywood career, she worked with film legends John Wayne, Cary Grant, Bing Crosby, Loretta Young, Betty Grable and others in 16 films. When she was 12 her mother died from early-onset Alzheimer’s disease. Soon after, her father died in an automobile accident. Orphaned, she was sent by the court to live with an aunt and uncle she describes as “kind of nutso religious fanatics who didn’t believe in movies, dancing, singing. I don’t think they believed in laughing, either.” Hollywood became a distant memory.

She married and had children. Her youngest child committed suicide at age 18. Her husband of 25 years died from lung cancer. The first time she ever saw It’s a Wonderful Life was at age 39. Karolyn eventually moved from the Midwest to the Seattle area. In the mid-1990’s things shifted and she became a sort of ambassador for the film. She travels the world sharing her memories. Those travels led her to downtown Bend, Oregon seven years ago.

She says of the film, “Oh, it was fresh and dark, about as relevant today as it was when it was made. Think of all the people out of work, losing their homes, hungry kids worried about their parents. What’s so different about today…”

Many can relate to George Bailey’s feelings of despair when everything seems to be going wrong. Life sometimes seems completely hopeless. I don’t want to minimize the severe obstacles many people around the world face today. Most will not reach into their front pocket to find Zuzu’s petals and won’t have a town full of friends to bail them out of their troubles. Finding ways to survive and overcome life’s travails does require friends; maybe a guardian angel like Clarence; and a belief in hope. Yes, the film is corny and unrealistic. But it does inspire a belief in hope. That’s why we watched It’s a Wonderful Life again this holiday season.

I wish you all a belief in hope and angels. May you be surrounded by true friends, now and always.

PS: Each year when we pull out boxes of ornaments to decorate our home, they include ceramic angels that we purchased from Karolyn Grimes’ website that she has signed for us. Each of our grandchildren has one too. They remind us that every time a bell rings, an angel gets her wings. And we sure do need our angels.