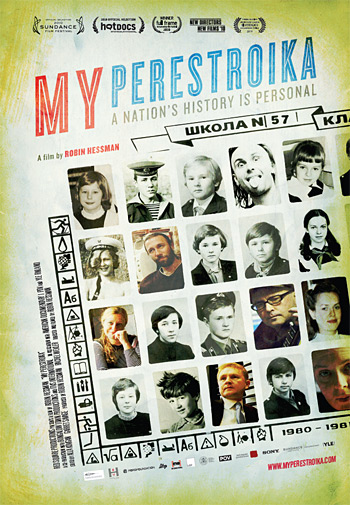 This wonderful documentary introduces us to five ordinary Russian people. They grew up in the Soviet Union, watched that system collapse during their teenage years, witnessed the extraordinary political changes that resulted, and raised families in post-Soviet Russia.

Of particular interest to me is that one of the editors of My Perestroika is Alla Kovgan, the talented artist who edited, co-directed, and co-wrote the film of our family journey: Traces of the Trade.

My Perestroika can be viewed online through August 28 through the P.O.V. website.

In this film, there are no “talking head” historians, no expert witnesses, no omniscient narrator telling viewers how to interpret events. Instead, Borya, Lyuba, Andrei, Olga and Ruslan share their personal stories. They were the last generation of Soviet children brought up behind the Iron Curtain. They take us on a journey through their Soviet childhoods, their youth during the country’s huge changes of Perestroika, and let us into their present-day lives.

The film interweaves their contemporary world with rare home movie footage from the 1970s and ‘80s in the USSR, along with official Soviet propaganda films that surrounded them at the time. Their memories and opinions sometimes complement each other and sometimes contradict each other, but together they paint a complex picture of the challenges, dreams, and disillusionment of this generation in Moscow today.

I encourage you to watch this wonderful film.