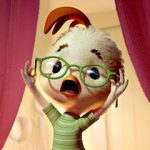 It’s obvious to me now. Chicken Little has taken over Washington, DC. A tiny fowl succeeded in a fiendish coup d’etat in which almost every member of Congress (with the possible exception of Senator Bernie Sanders) and many political pundits have been replaced by exact duplicates. Chicken Little’s accomplice? Must’ve been the Body Snatchers. What else can explain the hysterics being spewed by pod people who scream, THE SKY IS FALLING!

Will Republican House Speaker John Boehner and other Washington insiders sell the Tea Party and our nation down the river by caving in to President Obama on increasing the debt AND raising taxes? Only one thing will stop such a deal: you and I raising a cry of opposition that scares sense back into the Republican leadership. — Ron Paul

… if this deal with the Republicans takes a dollar away from those people who do not have a dollar to spare while preserving the millions for those who have millions more, if this deal, sir, keeps intact funding the mechanisms we have for killing people while cutting the mechanisms we have for keeping people alive and healthy, then it is a betrayal of everything that makes this country great. — Keith Olbermann

The Republicans need to grow the hell up. Seriously, grow up. This is an M80 inside a clenched fist. It’s irresponsible and completely dangerous. And I’m not sure what the hell the president should do at this point. The Republicans are playing chicken with economic collapse. — Bob Cesca

I’m not gonna play chicken with the notion that the United States would welsh on a debt. I think that is wildly political and irresponsible. — Sen. Claire McCaskill

Notice Cesca’s and McCaskill’s use of the word “chicken.” Coincidence? I don’t think so! Unfortunately, this ain’t no cartoon or science fiction movie. I also don’t anticipate a happy ending.

Like most Americans that pay attention to such things (outside of Congress, anyway) I’m frustrated by the inability of those in positions of power to compromise on our national debt, the deficit, the debt ceiling, tax loopholes, tax increases and budget cuts. The reason is the same as always: the very power, and the lust for more power, that those in positions of power crave. Everyone wants to retain power and will go to great lengths to do so.

Sadly, when the credits roll and the curtain falls on this lousy show, I expect the greatest burden to fall where it has always fallen: on the most vulnerable among us.

Logical people (in my opinion) know this posturing on both sides of the political aisle is all about politics and power and how to control both. But too few in power seem to be listening to logic.

…we are getting close to the 11th hour and it is clear that there are many Republicans willing to risk a default to achieve their ideological goal of slashing government. Although they say they are motivated by a concern for the nation’s finances, their total unwillingness to consider so much as $1 of tax increase proves that such claims are hollow.

Read Corporate Cash Con by Nobel Prize winning economist Paul Krugman. Watch “liberal” Mark Shields and “conservative” David Brooks calmly discuss these issues on PBS. Watch “liberal” Thom Hartman explain who ran up the national debt. Read what the pro-private-sector, anti-big-government magazine The Economist has to say.  Billionaire Warren Buffett recently pointed out that, “We raised the debt ceiling seven times during the Bush Administration” and “We had debt at 120 percent of the GDP, far higher than this, after World War II and no one went around threatening that we’re going to ruin the credit of the United States.” I think his pod person then took over to claim that the Republican-controlled Congress is “trying to use the incentive now that we’re going to blow your brains out…”

Finally, consider the thoughts of John Avlon of the Daily Beast regarding the pathetic failure of both Republicans and Democrats:

It doesn’t take a rocket scientist to see that the way to reduce the long term deficit and debt requires at least three things—spending cuts, revenue increases and entitlement reform. Economic growth is the final X-factor essential component.

Republicans won’t budge on taxes and Democrats (other than Obama) won’t budge on entitlement reform. Most people, according to a recent Pew/Washington Post poll, will blame the Republicans if a deal isn’t reached. If we want to play the blame game it appears the Obama Administration and congressional Democrats will win this game of chicken.

And who loses as a result of this childish insanity? Not the Republicans. Those who lose will be the people who can least afford it. And here is where the insidious specter of structural racism (as much as most of those in power, and many outside the halls of power, will deny it) can be clearly seen.

First read “Unnecessary Austerity, Unnecessary Shutdown” published by the Institute for Policy Studies to understand that “…we’re not broke. Not even close. The United States of America is awash in wealth.” But two factors “have unleashed a fiscal nightmare.” Most of America’s wealth is concentrated at the very top and the wealthiest among us are paying significantly lower taxes on there windfall wealth.

Most of the wealthiest people in America and most of the people in power in Congress and throughout corporate America look like me: white men. President Obama and Herman Cain notwithstanding, the overwhelming share of power and wealth has always been, and continues to be, concentrated in the hands of powerful and wealthy white men. Those on the opposite end of the scale are disproportionately poor people of color.

Read The Children’s Defense Fund “Portrait of Inequality 2011,” a report showing the gross inequalities facing black children compared to white children, across all critical indicators of wellbeing. This report explains how “the economic crisis of the last three years has pushed black children and youth deeper and deeper into an abyss of poverty, hunger, homelessness and despair.”

Finally, United for a Fair Economy has published “The State of the Dream 2011: Austerity for Whom?” Here is the Executive Summary. This report surveys the impacts of a tax-cutting, government-shrinking economic agenda on communities of color. If  such an agenda advances, “the dream of a racially equal society, as described by Dr. Martin Luther King, Jr. over forty years ago, will be pushed even further out of reach.”

The sky is indeed falling. I wish the pod people in Washington understood, and cared about, upon whom it falls.