Teardrops on the City 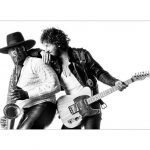 White man with a guitar leans on black man playing a saxophone. Both are dressed in black and white clothes. White album cover. Everything about the Born to Run album cover is black and white. Very little about Bruce Springsteen and Clarence Clemons was.

They didn’t make an issue over a black man playing in an otherwise all-white band in the early 1970’s when the wounds from Jim Crow and the recent Civil Rights movement were still fresh and raw. When they weren’t welcomed in certain towns or hotels, they just played their music elsewhere. They rocked. They danced. They engaged in soulful kisses. They laughed. They invited us to join them “when Scooter and the Big Man bust this city in half.” They chipped away at America’s racism by living its opposite.

From Eric Meola, the man who shot the iconic photo:

Is it, as so many writers have stated, a declaration of the friendship and camaraderie between the two men? Yes. Was it a deliberate, premeditated statement by Bruce about race relations? Probably not. Yet it became that, and by including Clarence from the beginning, Bruce chose not only the one remaining band member he most identified with, but the one who happened to be black. In an album of saxophone solos, from “Thunder Road” to “Jungleland,” it seems an obvious choice. And, a brilliant one which came to symbolize far more than any of us could have envisioned.

Those who know me well understand just how deeply I was impacted this past week by the passing of The Big Man, Clarence Clemons. I believe the last time I wept at the death of a “celebrity” was when Jimmy Stewart left us in 1997. The story of It’s a Wonderful Life (“no one is alone who has friends”) rests at the core of my philosophy of life. The music of Bruce Springsteen and the E Street Band provides the soul; the soundtrack for the life of my family since Lindi and I fell in love dancing to “Crush on You” twenty-six years ago at my old haunt, Pat & Mike’s Cinema & Restaurant.

Our three daughters used to create dances to perform to Bruce’s music (they shimmied and bopped a tremendous Hungry Heart). We drove to Tacoma in 1988 with our four kids and our dog Harley to wait in line for 33 hours outside the Tacoma Dome in a non-stop drizzle to buy tickets — long before internet sales — to see the band during the Tunnel of Love tour. Lindi and I have taken road trips during several tours to see Bruce and the E Streeters multiple times over the course of a week or so. Highlights include several concerts being perched in the very front row; our elbows resting on the stage. Lindi’s hands resting on Bruce’s knees during a guitar solo. Me furiously strumming Bruce’s guitar as he held it out to several of us during a Born to Run solo riff.

We met the Big Man one time at a hotel bar in Calgary. I walked up to him and pointed out Lindi and our friend Angel at a nearby table.

Angel’s from New Jersey, says I.

Is she now, replies the Big Man.

Her birthday is the same as yours.

Is that a fact.

I lean in close and whisper. She used to sneak into your club in Red Bank when she was underage.

Then she owes me money! he thunders. Get her over here! 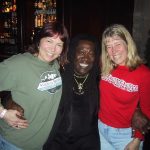 And so we got our photo of Lindi and Angel with Clarence. Truly one of the highlights of our many encounters over the past quarter century with Bruce and the E Street Band.

My feelings are strong. The sense of loss is tremendous. Knowing I’ve heard Clarence play his saxophone for the last time is heartbreaking.

I’ve waited a week to write about Clarence’s passing because I couldn’t find the words. I still can’t. So I’ve shared a few moments with you. The best words I’ve found were written by Dave Marsh. I hope you will take the time to read MIGHTY MIGHTY, SPADE AND WHITEY: Clarence and Bruce, Friendship and Race. Marsh helped me unpack the myth and recognize the impact that Bruce and Clarence have had on America.

Bruce and Clarence acted out their drama, which is our drama, in the exact same spirit as Twain, and with the exact same ambiguous result. At the end of Huckleberry Finn, Mark Twain was stuck because he had no ending. The ending he used is preposterous, obviously. But not because it’s over-reliant on the hand of God. The real problem is that it’s predicated on a false idea: Freeing one slave. You cannot free one slave, and since the slave owner is in the same prison as the slave, just like any other jailer, you can’t free two either. It’s all of us or none of us.

And I’ve never read more clearly and succinctly where so much of the responsibility lies for undoing racism and privilege in the United States:

What I am saying is, America’s race problem has never been solved because white people refuse to recognize that it is only action on their part that can solve it.

These two quotes, of course, are seen here out of context. Read the Marsh article in full. Then play the Born to Run album in full. Then ask yourself once again about your role in righting the wrongs in our world.

(thanks to Backstreets for providing so many wonderful links to stories about Clarence, and for all you do for those of us who Ramrod down E Street on our way to the Land of Hope and Dreams)