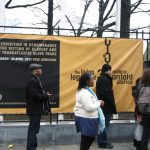 (UPDATE: Click here for photos from the post-screening discussion at the U.N. — I was glad to see that roughly 300 people were estimated to be in attendance.)

Traces of the Trade: A Story from the Deep North will be featured during the 2011 week of commemoration. On March 21 at 6:30pm at the United Nations building in New York, Katrina Browne, James DeWolf Perry, Elizabeth Sturges Llerena and Tom DeWolf will be present to discuss the film, its implications, and the ongoing legacy of slavery with those in attendance.

In 2007 the General Assembly of the U.N. declared 25 March the International Day of Remembrance of the Victims of Slavery and the Transatlantic Slave Trade. They schedule a series of events each year in honor of this time of remembrance and commemoration.

Our family is honored to be selected to join in this year’s series of events.

At the same time it gives me pause to spend an evening at the U.N. when its members, including my country, is presently bombing Libya in the name of democracy and freedom. What complex and contradictory people we humans are. And how good we are at creating weapons and enemies. And how much we need to learn to survive such creations.