Healing in Tulsa… 90 years on, still a work in progress

On May 30, 1921, a black man named Dick Rowland entered an elevator operated by a white woman, Sarah Page, in the Drexel Building in Tulsa, Oklahoma. What happened next is known only to Rowland and Page. One version is that the elevator jerked, and they stumbled into each other. Another version is that Rowland stepped on Page’s foot and she lost her balance and Rowland reached out to prevent her from falling. What is known is that Page screamed. Rowland ran out of the elevator and was arrested for a sexual attack. White people wanted to lynch him. Black people prepared to defend him. What happened over the next two days was one of the most violent and costly incidents of racial violence in U.S. history. 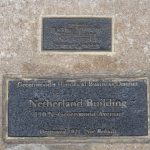 Walking today through the Greenwood section of Tulsa you can feel the weight of traumatic history that has not been fully healed. Embedded in the sidewalk along Greenwood Avenue and other streets are bronze markers for every building that was destroyed.  The Greenwood Cultural Center displays photos of survivors and quotes of their memories of that awful time so many decades ago. It’s a place that reminds you of horror. It also reminds you of the resilience of the black people who were so badly abused, murdered, and run out of town. This area of Tulsa reminds you of hope. 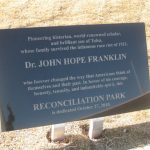 John Hope Franklin (1915-2009) is the son of a survivor of the riot. He, his mother and sister were on their way to Tulsa to join his father when the family received a telegram saying not to come. It would be more than four years before their family was reunited. The new John Hope Franklin Reconciliation Park was dedicated in October 2010. The idea for the park grew from the results of the 2001 Oklahoma Commission to Study the Tulsa Race Riot of 1921. Through sculpture and words, it tells the story of the Riot and of the role African American people in building Oklahoma. 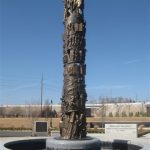 My friend Harold Fields told me that the sculptures were the work of Ed Dwight, father of a friend of Harold’s, Tamara Rhone (a retired teacher in Denver, Colorado whose class Harold and I visited in 2008). His work in this park is stunning. The pieces inspire deep thought and contemplation about the history it represents. It was later, when I visited the galleries on his website, that I learned just how prolific and powerful an artist Mr. Dwight is, AND that I had seen his work in other settings in the past, including the Dr. Martin Luther King Jr. Memorial in Denver and the Alex Haley/Kunta Kinte Memorial in Annapolis, Maryland. I look forward to taking in more of this fine artist’s work, including The Frederick Douglass Museum later this spring with my writing partner Sharon Morgan.

There are many people around this vast country dedicated to exploring the truth of our nation’s history (no matter how challenging), seeking justice, spreading compassion, and working for peace in the face of present-day damage from the historic traumas of slavery and racism. I’m blessed to have worked with many such people in Tulsa, Oklahoma, including those at the YWCA who are dedicated to eliminating racism, empowering women and promoting peace, justice, freedom and dignity for all, the leaders of Tulsa Community College’s Civil War Sesquicentennial Commemoration Series who are bringing speakers and too-often-misunderstood information about the Civil War, Reconstruction and the past 150 years of our nations history to students and Tulsa residents, and the Multicultural Student Programs Office at the University of Tulsa, dedicated to providing diverse cultural and educational programming for the TU and greater Tulsa community.

You can read about my visit in an article in the Tulsa World, and watch my interview with Loren Farr on the program Studio 21 (part one and part two). And here are more photos of my visit to Tulsa.

I also encourage you to learn more about the Tulsa Race Riot. This is a story that has been suppressed for far too long.