Anyone who travels a lot has surely experienced travel travails. It’s a good thing I rather enjoy traveling–for the most part. Winter offers the most challenges. Take the past few weeks for instance…

My wife Lindi, my writing partner Sharon Morgan, and I flew to New York at the end of our two-week writing retreat in Tobago. We left 85 degree tropical warmth behind and flew into ice and snow. Lindi flew back home. Sharon and I drove to her home ninety miles outside the City. I planned to stay with Sharon for two nights before heading to Detroit on Tuesday where I was scheduled to make presentations at two colleges and one high school on Tuesday evening, and Wednesday and Thursday.

The weather reports for most of the country, and especially New York and the Midwest, looked pretty dicey. 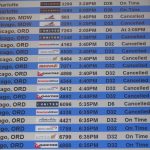 I received two automated phone calls from Southwest Airlines late Monday afternoon letting me know that my flight to Detroit on Tuesday afternoon was canceled. Every flight going through Chicago was canceled. I went online and found one flight still going to Detroit at 7:20am; through Baltimore. I called Southwest and waited on hold for 15 minutes. When I finally got through the woman on the other end of the line was quite helpful. The flight I found was indeed the only way I would make it to Detroit and she re-booked me.

So instead of spending another warm night in Sharon’s spare room I caught the last train back into New York City at 10:00pm. Arriving after midnight I made a beeline for the E train to take me to Queens. Only the E train wasn’t running because of construction. I caught the A uptown to 59th Street and then the B back downtown to Roosevelt Center where I caught an F train to Queens. What normally would take 20-30 minutes took 90. Then I just barely caught the 1:30am Q33 bus to LaGuardia and arrived at 2:00 in the morning. 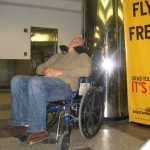 The terminal was a ghost town. There was no one at the Southwest counter and none of the boarding pass kiosks worked. So I snagged a nearby wheelchair to avoid sitting on the hard, tile floor.

Twas a long, sleepless night. But I made it to Detroit without further incident. I had no sleep, of course, but C’est la vie. I rented a car and drove to the hotel. That’s when I received word that all events I was to participate in on Tuesday and Wednesday had been canceled. Weather reports said that a blizzard with up to 18” of snow was on its way so pretty much every school announced closures.

So instead of leading the discussion after a Tuesday evening screening of Traces of the Trade, I watched the icy-cold weather reports on television–and out the window–in my hotel room. I finally fell asleep after inserting earplugs. The folks in both adjoining rooms were quite noisy—all night long. I dreamed about Tobago.

I got up the next morning and discovered that the weather reports were wrong. It hadn’t snowed even an inch where I was. But the wind was really howling and it was frigid cold. So instead of preparing for the two presentations I was to give at Schoolcraft College, I hung out in my hotel room. I checked on the status of my flight home the next afternoon and then… oh no…

I discovered a HUGE error I had made.

I had no reservation to fly home the next day, February 3. I had a reservation to fly home one month from the next day, on March 3. WHAT?! How did I do that? I try to be SO careful when making reservations because I make so many of them. But I clearly screwed up this time. I soon learned, much to my dismay, that in order to change my reservation I had to pay any difference between the cost of my original ticket and the replacement, plus a $150 fee. I can’t even bring myself to admit how much it cost for me to change my reservation.

But at least I was able to change it. There were only three seats left on the only flight that worked for my schedule. I read that more than 6,000 flights (20% of all flights across the entire U.S.) had been canceled as of 4:00pm on Tuesday due to the huge storm that affected something like 30 states. Chicago got over 20” of snow in 24 hours. Still no flights were going in or out of Chi-town. Boston was closed. Dallas was closed. JFK was experiencing 5 hour delays; Newark 8 hours. Good grief! I was glad I was heading for St. Louis and then Salt Lake City. 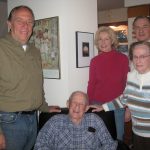 The silver lining to all this is that I was able to enjoy a wonderful dinner with my newly-discovered 10th cousins, Jim and Nancy DeWolf. Jim’s parents, who recently celebrated their 71st wedding anniversary, were also there. We had a great time discussing family history and looking at pictures and genealogy charts. It was a lovely evening! 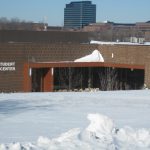 And the next day went smoothly. The storm had passed. Schools reopened. I spoke with a large, enthusiastic group of students, faculty, and community members at Oakland Community College. I then made it back to the airport in plenty of time for my flight home.

After three weeks on the road I was happier than usual to sleep in my own bed. Over the course of our little journey I’d gone from 85 tropical degrees to Zero and then back to the mid-50’s at home. I woke up the next morning with a humdinger of a winter cold.

Ahh, life on the road…

It’s now been one week since I returned home. I have no complaints. My cold is almost gone. We’ve scheduled my return to Schoolcraft College in early April. And I head for Tulsa next week to participate in several events in connection with Tulsa Community College’s Civil War Sesquicentennial Commemoration, as well as presentations at the University of Tulsa and a local high school and elementary school.

It was 9 degrees below zero two night ago in Tulsa. Help, Mother Nature!

(for more photos of my winter adventures click here)