American Idol: Randy Jackson pops my cousin in the mouth–and sends her to Hollywood! 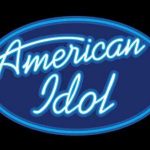 My sister wrote to ask me if we’re related to Molly DeWolf Swenson, the phenom who sang Sitting on the Dock of the Bay on American Idol on the January 26 episode. Molly became an instant sensation both for her terrific voice as well as for her encounter with Idol judge Randy Jackson’s hand.

“Of course we are,” I wrote. Molly is our 7th cousin, twice removed. Our common ancestor was born in 1695 in Connecticut. We’re descended from that guy’s older son, Simon D’Wolf; Molly is descended from his younger son Mark Antony D’Wolf.

Those who have read my book Inheriting the Trade will recall Nancy Abercrombie, in whose home my roommate Ledlie Laughlin and I stayed while we were filming portions of Traces of the Trade in Bristol, Rhode Island. My dear friend Nancy is my 7th cousin. Consequently, her granddaughter Molly is my 7th cousin, twice (two generations) removed. My grandchildren and Molly are 9th cousins. Got it? (if not, please inquire about genealogy lessons… ;o)

Talent clearly runs in the family. Molly’s father (Nancy’s son) is Christian Swenson, a renowned performance artist and teacher whose work has been praised from the Seattle Times to the New York Times as “extraordinary” and “remarkable.”

Over the past few years I have met SO MANY DeWolf cousins that if we all watch Idol and vote for Molly she’s bound to go very far indeed. And this isn’t simply a call for nepotism. Molly is fabulous! Watch her winning performance here. 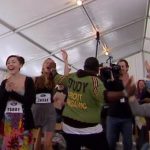 She received a bit of extra attention when, prior to her audition she was among a group of contestants waiting in the holding room when Randy Jackson bopped exuberantly through. While “high-fiving” everyone, he inadvertently smacked Molly in the mouth. She called him out on it prior to singing the Otis Redding classic. When he asked if it was possible that his hand hit someone else’s hand that actually hit her face, Molly replied that, well, no, Randy, “It was your big ol’ hand.” Video footage of Randy popping Molly confirmed her version of events–complete with added appropriate sound effects–several times during the episode.

Molly is a graduate of Harvard and worked as an intern in the Obama White House. Her family is justifiably head-over-heels excited, and quite proud of her. Here’s hoping you’ll join all of us DeWolf relatives and help launch Molly into the Idol stratosphere!