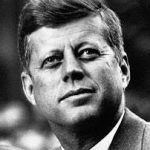 Fifty years ago, on January 20, 1961, the torch was passed to a new generation when John F. Kennedy was inaugurated as President of the United States. The address he gave is one of the most inspiring and important speeches of 20th century. The John F. Kennedy School of Government at Harvard University has produced a film of Kennedy’s inaugural address that utilizes the talents of people like John Lewis, Marian Wright Edelman, Gwen Ifill, Jeb Bush, Colin Powell, Stephen Breyer, Mark O’Connor and dozens of others to recite JFK’s words in a moving tribute to our 35th president.

This wonderful film provides a powerful reminder of the path Kennedy asked “we the people” to travel, and just how far we still have to go. Watch the film and explore the website here.

In your hands, my fellow citizens, more than mine, will rest the final success or failure of our course. Since this country was founded, each generation of Americans has been summoned to give testimony to its national loyalty. The graves of young Americans who answered the call to service surround the globe.

Can we forge against these enemies a grand and global alliance, North and South, East and West, that can assure a more fruitful life for all mankind? Will you join in that historic effort?