I met Susan Hutchison through my involvement with Coming to the Table, a group of people committed to acknowledge, understand, and heal the persistent wounds of the legacy of slavery. Susan is one of the co-founders of this remarkable organization and a descendant of slaveholders. I hope you are as moved by her story as I am…

Full stop. My heart raced. I tried to absorb something of the human meaning of this discovery. I had seen slave names in property lists before, and it was always unsettling. This time there was a whole new dimension in the form of living people – Henry’s grandchildren and great-grandchildren – kinfolk I would soon meet.”

BRIDGING THE GAP, by Susan Hutchison

In August of 2010 I traveled from relatively cool and mossy Seattle to the humid, cricket-buzzing heat of southeastern Mississippi for a family reunion I will never forget.

I am white, and this was a black family reunion. No, I was not marrying into the family. These were my cousins. My great-great grandfather, William Trotter, was the father – and slaveholder – of Henry Trotter, the man whose descendants were gathering from across the country.

This was obviously not your typical reunion situation, and deserves a little background to put it in context. Several years earlier, inspired by my involvement with descendants of Thomas Jefferson and Sally Hemings (Thomas and Martha Jefferson are my 6X great-grandparents), I co-founded a racial reconciliation program called Coming to the Table, which brings together descendants of slaves and slaveholders who are committed to dialogue and healing. The name was inspired by a line from Dr. Martin Luther King, Jr.’s famous March on Washington speech – “I have a dream that one day… the sons of former slaves and the sons of former slave owners will be able to sit down together at the table of brotherhood.”

The remarkable people I met through Coming to the Table and the hopeful nature of our relationships inspired me to want to search for other “linked descendants,” people to whom I was “related by slavery.” It felt like a small but meaningful attempt to foster some healing of the racial dysfunction we Americans have inherited from our history of slavery.

William Trotter seemed like a logical starting point for my quest. I knew that he’d lived in Clarke County, Mississippi, had enslaved around 40 people, and that he’d self-published a disturbing 200-page defense of slavery just before the Civil War. Dave Pettee, a Coming to the Table friend and cousin, helped me tremendously with research, going so far as to meet me in Mississippi to see what records we might find in the county courthouse. Dave is a skilled genealogist, and had done exactly this kind of research before.

Within a few months, I was in contact with three descendants of Henry Trotter. One of these cousins, Gary, was a family historian, and had stumbled upon Henry’s misfiled death certificate – which listed William as Henry’s father – in the Mississippi State Archives. Another cousin, Mamie was, ironically, the housekeeper for the still-standing William Trotter house. Maceo was on the reunion organizing committee, and invited me to attend the next reunion and to be part of a presentation about our shared family history. I was honored to be invited, and eager to meet these new relatives.

Months passed, we exchanged some calls and emails, and at last it was reunion time. Dave joined me in Mississippi again. We arrived a day early for more research in the county courthouse.

On our earlier visit we found documents with names of people enslaved by the Trotter family, but Henry was not among them. This time we looked for Henry, and found him. He was in an inventory of personal property that began with a list of 33 names of enslaved men, women and children.

one negro woman Mourning appraised at $300

Full stop. My heart raced. I tried to absorb something of the human meaning of this discovery. I had seen slave names in property lists before, and it was always unsettling. This time there was a whole new dimension in the form of living people – Henry’s grandchildren and great-grandchildren – kinfolk I would soon meet.

The reunion began Friday night with a reception at a community center outside of Laurel, Mississippi. Dave and I got what felt like a few skeptical looks as we walked across the parking lot and through the doors into the meeting hall. Even though I’d heard that word had gotten around that I was coming, I wasn’t sure if everyone knew who I was, and why I was there.

Lucy, one of the organizers who had encouraged me to come, walked over to greet us warmly right away, and directed us to the registration table where we met Delores, the main reunion organizer.

Delores welcomed me with a big smile and a hug, then immediately pulled out the reunion t-shirt to show me. She had worked with a friend to come up with the design and was eager to see if I would like it. The words “Bridging the Gap” were printed in gold, on a black shirt. Above, a black hand and a white hand reached out toward one another, a burst of light in the center where their fingers touched, the two sides of an incomplete bridge comprising the source of each arm. I was stunned and deeply moved.

After giving Delores some booklets I’d prepared about our shared family history, I settled into meeting people and visiting. I talked with Barbara, a cousin about my age from South Carolina. Barbara was sweet, warm and friendly, and I found myself relaxing more and more as we talked. I also visited with Gene, an outgoing retired Army officer and Trotter family historian from Colorado.

The next morning there was nothing scheduled. Dave and I drove out into the country to see where the William Trotter farm had been. The countryside was tranquil and beautiful, with emerald green pines and rolling, grassy hills. The intense August heat and the buzzing of crickets fueled my imagination, as I tried to conjure up some sense of what life was like on this land so many years ago.

How could such benign beauty be connected to such painful history? Would my new cousins and I be able to transform the legacy of that painful history into something positive?

It was time for the banquet. Soon I would share with the group what I had learned about William Trotter, our common ancestor. I could do this only because I had learned from many descendants of people who had been enslaved how meaningful it was for them when white descendants of slaveholders shared this kind of genealogical information and fully acknowledged the history of slavery, rather than avoid or deny it. I had learned that many descendants of slaves feel cut off from their roots due to the genealogical ‘brick wall’ of slavery – no names in census records; no records of births, deaths, or marriages; private slaveholder family and business records rarely accessible.

While some descendants of slaves, understandably, do not want to learn about their family’s connections to slavery and face the pain of that past, I felt it was important to accept the invitation that had been extended to me, and to talk about what I had found. I only hoped that my sharing might provide some small measure of healing and repair.

The evening program began with an opening prayer. I was nervous and found it hard to focus on the program. Suddenly, ahead of schedule, I was called to the microphone.

As I began to talk, fifty solemn faces watched me intently. I let them know that I might get a little emotional as I talked, but that they didn’t need to worry about me or take care of me – this was just part of facing the truth and part of the healing.

I talked about William Trotter and his family for several minutes, referring to notes, pausing too long, feeling awkward and trying not to blow it.

Then came the hardest part – telling them about finding Henry listed as personal property – a boy, valued at $500. The words almost stopped in my throat, but managed to force their way out.

A few minutes later I was done. This was not a time for smiles and applause, and there was no way to know if my offering brought pain or healing, or both. I could only hope.

As I returned to my seat, Gene was called up and took my place at the microphone. He reflected briefly on the Lord’s Prayer, particularly the phrase, “Thy will be done,” by way of encouraging people not to let the information that I had shared trouble them. He went on to talk about the eleven children and 56 grandchildren of Henry and Salina Trotter, including one daughter who died in 1990 at the age of 112, and one granddaughter who bore 22 children.

After the program, several people made a point of coming over to offer appreciation or encouragement in one way or another. While I didn’t want anyone to feel they had to reassure me, I have to admit I felt relief with every positive word. 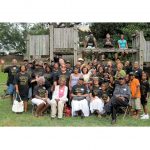 With the banquet presentation behind me I could relax. At the Sunday picnic I listened to Kevin and Eric tell stories of snakes and jobs, laughed with Corine, one of the family elders, and visited with Gloria, a poet from New Orleans who had lost everything in Hurricane Katrina. I ate delicious barbeque, and tried pig’s feet for the first time (and probably the last).

After a long, easy afternoon, everyone gathered for a group picture. Dave and I started saying goodbyes, and as we began making our way to the car, several people intercepted us for some last minute pictures.

I drove away from Laurel feeling happy, blessed, and confident that it had been the right decision to reach out, accept the hand that had been extended, and begin to bridge the gap.