UPDATE: for another thoughtful perspective on this subject, I encourage you to read my cousin James DeWolf Perry’s post, Censorship, the ‘n-word,’ and Mark Twain’s ‘Huckleberry Finn’ 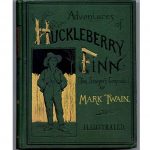 Mark Twain defined a “classic” book as one “which people praise and don’t read.” He should know. How many of you have read Huckleberry Finn? This “classic” has been condemned, banned, or people attempted to ban it, in a variety of locations, and for various reasons, since it was first published in 1885. Back then it was banned because Twain had the audacity to create a character, Jim, who was not only black, but as human–and as fully developed–as the other major characters in the story. Jim is not only fully human, but the hero of the story. It ran contrary to everything white Americans had been raised to believe; that white America had been built upon since its founding.

When I was in junior high school in the 1960’s, several of my black classmates wanted the book banned from our school library for a different reason: because Twain regularly refers to Jim with the “n” word, which they found deeply offensive. Many teachers in K-12 classes struggle with how to teach this masterpiece, about which Hemingway said, “All American writing comes from that.” It is challenging to explain to kids today the context in which Huck Finn was written. I believe I understand the difficulties teachers face.

Caveat: in the interest of full disclosure, I’m a white man writing about a book that was written by a white man–albeit one who died 100 years ago in a very different era. I encourage readers to ponder these facts as you consider my words. I also encourage you to consider what others have written, like Princeton Professor Melissa Harris-Perry or author Earl Ofari Hutchinson for instance. Further disclosure: The Adventures of Huckleberry Finn is the best book I’ve ever read. No one else can ever write the “Classic American Novel.” It has already been published. This is it.

A new version of The Adventures of Huckleberry Finn is now being published by New South Books. Twain scholar Alan Gribben is the editor. He has replaced the “n” word with the word “slave.” I’m sure Dr. Gribben and New South Books have the noblest of intentions; to get Twain back into K-12 classrooms.

And there are many reasons why this is a really bad idea. I’ll focus on two:

When my grandchildren are old enough to enjoy and learn from Huckleberry Finn I hope they’ll read it the way Twain wrote it. I trust their parents–and hopefully their teachers–to work with them to understand the context of the times in which Twain lived and wrote, the horrible system of slavery that drove the entire economy of our nation, and why it is important to understand and talk about these issues.

We’ve all heard that the roads in Hell are paved with good intentions. This new edition of The Adventures of Huckleberry Finn is a well-intentioned mistake. Read the original. Then read it–and discuss it–with your children.