The Reporter I trust (and there aren’t many) 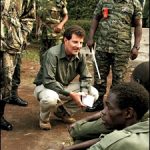 When I was a child television news in our home meant Walter Cronkite. In junior high school history class we watched his “You Are There” series of historical reenactments. There were reasons he was the most trusted man in America; why President Johnson once said, “If I’ve lost Cronkite, I’ve lost middle America” and became a one-term president. Cronkite was calm, thoughtful and balanced. His work and his words made a positive difference.

Most popular news celebrities today–from both the right and the left–remind me far more of Howard Beale in the movie Network (“I’m as mad as hell, and I’m not going to take this anymore!“) than of Walter Cronkite. There are exceptions, of course. But for the most part it seems like so much screaming, interrupting, innuendo, corporate influence, and preconceived bias. What we see on television and hear on radio isn’t news. It’s entertainment. It’s opinion laced with vitriol. The focus isn’t on informing the public about the important issues of our day; on providing knowledge and understanding. It’s about profits.

And then there’s Nicholas Kristof.

Without the reporting of Nick Kristof the world may never have learned about the crisis in Darfur; certainly not as early as we did. I look for his columns in the New York Times because they always inform, they help me think, they broaden my knowledge about issues that matter around the world. I’d like to also recommend to you two projects of his outside of the Times.

Kristof and his wife, Sheryl Wudunn, wrote the book Half the Sky: Turning Oppression Into Opportunity for Women Worldwide. Did you know that more girls have been killed in the last half century–because they were girls–than all the men who were killed in all the wars of the 20th century? The authors demonstrate clearly that the abuse and enslavement of women and girls is the greatest moral outrage of our time. This is one of the best and most powerful books I’ve read in the past year. I was honored and humbled when I learned that the United Methodist Women selected both Half the Sky and Inheriting the Trade for their 2011 reading program.

While participating in, and presenting at, the Bioneers Conference recently with my friends Belvie Rooks and Dedan Gills, I saw the documentary film The Reporter. In it, we follow Kristof in 2007 when he traveled to the Democratic Republic of the Congo. More than five million people have been killed there over the past decade. Kristof’s mission is to make sure this humanitarian crisis is well-known; that everyone from typical citizens to international decision-makers knows what’s happening with the hope that with this knowledge will come the responsibility to make a positive difference there. He meets people from the most humble peasants in devastated villages to the Congo’s leading rebel warlord in his jungle lair. It’s a harrowing and important film.

Reading Half the Sky and watching The Reporter may give you the impression that Kristof pretty much reports on the most horrible and sad situations around the world. That is true. And we should all be grateful for his important work. We have choices. We can watch and read the bizarre “info-tainment” that passes for “news” in most places today. We can hide from the important news because so many places and situations in the world are horrible. Or we can seek out those who can help us understand the terror and oppression that continues to plague our world and, with that knowledge, do something about it.

Paying attention to Nick Kristof is a good place to begin.