Tim from Far Away 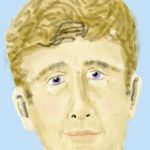 I want to introduce my friends to a special young man. Tim Howe is a junior in college. He’s presently concluding a “study abroad” program in Africa (Kenya and Tanzania) through Lewis and Clark College. Tim is my 7th cousin. Our common ancestor was born in 1695. Anyone who has read my book, Inheriting the Trade, will recall Tim’s father, David Howe, who introduced me  to an entire side of my family I never knew before. That introduction led me to participate in the journey that became the Emmy-nominated film Traces of the Trade, as well as my book.

Tim has been blogging regularly while on his journey. This experience is changing my young cousin’s life in ways that will serve him and our world well. His first post in late July included this…

…what I think I am is confused. Sure, in the grand scheme of things, I suppose I have my life “together”. I’m a junior at a midlevel liberal arts college, I write music and draw on a regular basis, I run and swim and play frisbee, and for the most part, enjoy a standard shenanigan as much as the next schmuck. I freakin love the concept of cooking, but probably because of the end result more than anything. What I’m CONFUSED about is where I am positioned in this exponentially grandiose and simultaneously shrinking planet we chill on.

Over the past few months my cousin has learned and grown. He’s experienced other cultures–so far from that in which he grew up–and has matured in ways that he never would have without this amazing opportunity. From his most recent post:

I can’t believe I’m here right now. Not in the sense of location, I think I’m finally coming to terms with where I stand latitudinally and longitudinally; my stomach can tear through literally any cut of grizzled meat they throw at me; my Swahili is at a point in which I could survive if I decided to set up camp for good here; my feet are like rhino hide, as they should after weeks of tortuous barefoot land walking (although the occasional acacia thorn the size, shape and sharpness of an eagle talon tends to find its way into the depths of my heel, still). What I can’t believe is where I am in the program, a week away from our final culmination, our retreat and departure. On another note, I cannot believe the immense amount of experience we’ve acquired here. I’m convinced that this is a trip that cannot be replicated unless you are Oprah Freakin’ Winfrey. The people we’ve stayed with, the places we have been able to walk on foot, these are things that don’t come with just a phone call to a tour agency, but lifetime relationships of trust and understanding that we conveniently are allowed to view peripherally.

I encourage you to spend some time at Tim’s blog. If you have some influence with young people of his age I hope you’ll encourage them to take advantage of international study programs. Our world will benefit from their experiences.