Who the heck is John Parker? 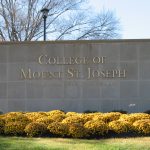 John Parker. Margaret Garner. Robert Smalls. John Rankin. They are not among the most well-known of historic figures yet their impact was profound for those whose lives they touched.

I spoke recently at The College of Mount St. Joseph in Cincinnati, Ohio. Larisa Wright leads the Office of Multicultural Affairs there, which, like similar offices at many colleges, works to create a campus environment that values and respects everyone, no matter their race, gender, age, sexual preference, religion, or beliefs.  I love working with such groups and am blessed to have been invited to work with students at Mount St. Joseph.

One of the many blessings I receive in working with so many colleges is knowing that we all have lots of allies around the world working for truth, compassion, justice, and peace. When world events, and local events, sometimes make us feel hopeless, we can call on our friends, get back to work, and hope rises once again.

Which brings me back to John Parker. 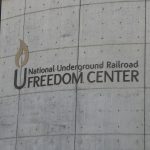 Another blessing I receive as a result of my work is the ability to visit some amazing facilities that highlight aspects of history that are not so well-highlighted in the classroom. While in Cincinnati I spent an afternoon at the National Underground Railroad Freedom Center. 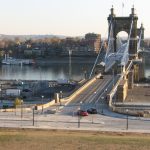 Located on the bank of the Ohio River–it was here that many enslaved people ran away from Kentucky and other Southern states toward freedom in Canada and other places North. It was at the NURFC that I learned the story of John Parker. Born enslaved in Virginia in 1827 he was sold away from his family at the age of eight. Once he secured his freedom he became one of the most daring of freedom fighters, slipping into Kentucky to free hundreds of people by bringing them safely across the Ohio River.

I learned about Margaret Garner, Robert Smalls, Reverend John Rankin and his wife Jean and their children, and others who risked their lives and freedom to fight the system of enslavement. I spent 3 1/2 hours at the NURFC and could easily have spent twice that much time. The most important first step in understanding the enormity of the mess we’re in regarding race and other forms of oppression is educating ourselves.

I also visited the America, I Am exhibit at the Cincinnati Museum Center. This powerful exhibit tells the story of the imprint African American people have had on the United States throughout our history. It drives me a little crazy that we have a “Black History Month” each February. America, I Am is a powerful reminder that the history of black people is inseparable from all of American history.

Previously on display in Philadelphia, Atlanta, and Los Angeles, America, I Am is in Cincinnati through January 2. It then moves to Washington, DC for three months beginning February 1, 2011. 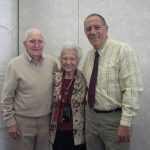 Finally, a shout out to Helen and Clayton Strider. Helen was the organist at Pomona First Christian Church when I went there as a child. She now lives near Cincinnati with her husband of 4 years. They met in the 1960’s when she was the organist at the church Clayton and his wife (Helen’s best friend) attended. They reconnected a few years ago after their respective spouses had passed away. At ages 90 and 94, Helen and Clayton married. That, my friends, is faith in the future. When Clayton recently turned 98, he celebrated by skydiving from 15,000 feet. That, my friends, is simply amazing, eh!? I hope I’m still around when I’m 98, that I’m even walking, but jumping out of an airplane? Wow! Seeing Helen, and meeting Clayton, was another highlight on a trip to Cincinnati filled with them.

I hope the work I do has a positive impact on the students at the College of Mount St. Joseph and other institutions at which I speak. I highlight opportunities for all of us to educate ourselves further. I also recognize the benefits I receive through my work. I am one blessed man.

To see a few additional photos from Cincinnati, click here.