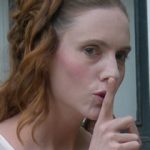 I’m excited to spread the word that my cousin Elizabeth Sturges Llerena will have an exhibition of her artwork–dynamic images that explore New England’s complicity in the system of enslavement and its legacy today–at Linden Place Museum in Bristol, Rhode Island October 29 – November 13.

This Friday, October 29, from 6pm – 9pm, Linden Place will host an opening reception, performance piece and gallery talk by Elizabeth in the mansion.

Linden Place is commemorating the 200th anniversary of the construction of the mansion by George DeWolf in 1810. As noted in Traces of the Trade and Inheriting the Trade, the house was built with the proceeds from the slave trade after it was declared illegal in 1808. 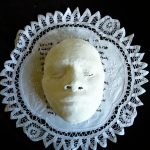 From the press release: Elizabeth will display a variety of artworks regarding the subject of slavery, which incorporate or imitate objects in Linden Place’s collection. Watercolor paintings of Ghanaian women, sketches and African face casts, which symbolize New England’s involvement in the slave trade, are juxtaposed with Linden Place Mansion’s original collection of paintings and antique furnishings. Her piece “What’s Hidden Underneath” explores her family’s collective silence about slave traders in the family using a dress based on a 19th century design with the legacy of slavery made visible only by pulling back the front panels of the dress. This unique period dress cleverly hides images of the Triangle Trade, highlighting this part of Linden Place Mansion’s and the Northern states’ often overlooked history.

Elizabeth is an accomplished artist and also teaches art in New York City. She confronts audiences with the history and legacy of slavery and institutional racism and encourages people to reflect, reconsider assumptions and adjust ways of thinking about U.S. involvement in slavery. She has exhibited at Brooklyn’s A.I.R. Gallery, NYU’s Bronfman Gallery among other venues. 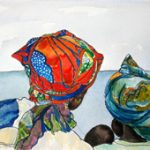 I’m sad that I won’t be able to attend the opening but do plan to see the exhibit when I’m in Rhode Island the following weekend. A few friends and cousins will be there Friday. I’ve seen much of the work that will be on display and it is quite powerful and moving. You can see more of her work on my website here.

I’m sure you’ll find, as I have, that Elizabeth Sturges Llerena is an amazing artist and is using her gift to make the world a better place.