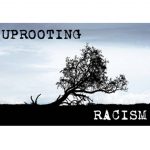 I spent the past week working in Bermuda. I know, I know, rough duty but someone’s gotta do it, right? The fact is that racism grows in tropical climates as effectively as anywhere else and it takes dedicated people of good conscience to work toward uprooting it.

C.U.R.B. is just such a group. In the past they’ve brought in such speakers as Tim Wise, Lee Mun Wah, and my cousin Katrina Browne. Watch this video of the Q&A with Katrina following one of the Traces screenings last April.

C.U.R.B. asked me to join them as they implemented The Big Watch (Traces of the Trade was screened on the government-run, public television station (CITV) three times a day, every day throughout October) and The Big Read (as Bermudians were encouraged to read Inheriting the Trade).

C.U.R.B.’s mission is to identify and dismantle racism in all its forms and to address its effects. Bermuda is one of the wealthiest places on earth. And yet racism, and its negative impact on both people of color and white people, persists. We spent the week meeting with students at four different schools, with folks at several community gatherings, and with a Rotary Club. I participated in half a dozen radio, television and newspaper interviews which definitely helps spread the good word!

To see a few photos from our week’s work, click here. Big thanks to my friends Lynne, Haile, Tina, Mark, Cindy, Larry, and everyone else connected with C.U.R.B. All blessings to you as you continue your work toward Uprooting Racism in Bermuda. I look forward to our paths crossing again in the future.