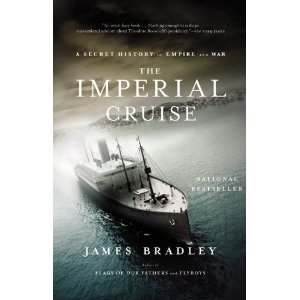 I spent several days this past week in San Francisco with my dear friends Belvie Rooks and Dedan Gills, co-founders of Growing a Global Heart. We shared our stories of “Slavery’s Legacy: What Would Healing Look Like” with audiences at the California Institute of Integral Studies and the Bioneers Annual Conference.

Belvie and Dedan recommended the powerful book The Imperial Cruise to me several weeks ago. They found in it another valid way to contextualize the important and ongoing conversation we’re having about the legacy of the damage caused by the system of enslavement and racism in our world today.

The author, James Bradley, achieved prominence for his first book, Flags of Our Fathers–the true story of six men (including his father) who raised the American flag on Iwo Jima in World War II. The book received mostly favorable reviews and was made into a movie by director Clint Eastwood.

The Imperial Cruise has not been as well-received.

In the summer of 1905 President Theodore Roosevelt sent his Secretary of War William Howard Taft on a diplomatic mission to Hawaii, Japan, the Philippines, China, and Korea. The president’s daughter (the equivalent of a “Brittney Spears” media darling of her day) was along for the ride. She provided a media distraction that kept reporters in the dark regarding the true mission of the voyage. A series of secret and unconstitutional negotiations took place that set the stage for what would unfold in the Pacific. According to Bradley, The Imperial Cruise ultimately resulted in communism taking root in China, war breaking out in Korea, and tens of millions dying over the next few decades.

The New York Times says, “Mr. Bradley favors broad strokes and may at times be overly eager to connect historical dots, but he also produces graphic, shocking evidence of the attitudes that his book describes.”

I’m not convinced one way or the other that Roosevelt’s policies led to the Korean War and other atrocities. Those specific details don’t really matter to me. What is most significant about The Imperial Cruise, and to our understanding of how this history continues to impact all of us today, is the “attitudes” the Times notes; that President Roosevelt’s absolute belief in Aryan supremacy informed virtually every aspect of his life, beliefs, and his presidency.

I celebrate the creation of our nation’s system of National Parks that Teddy Roosevelt championed. I’m deeply saddened that his racism played such an integral role in how he viewed the world and his place in it. As has resulted from the actions of so many other racist white people in positions of power, Roosevelt’s beliefs and policies caused great suffering for many so that a few–mostly white men–could benefit.

As Senator John Calhoun of South Carolina said at the time, fully in line with the beliefs and policies of President Roosevelt, “We have never dreamt of incorporating into our Union any but the Caucasian race… Ours, sir, is the Government of a white race.”

And some wonder why the melody of racism lingers on.

I highly recommend The Imperial Cruise.