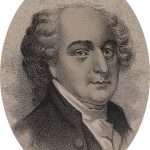 Throughout American history John Adams has mostly lingered in the shadows beneath his contemporaries George Washington and Thomas Jefferson. Washington was “first in the hearts of his countrymen.” Jefferson wrote the Declaration of Independence. Adams was a one-term president sandwiched between those two American giants that both served two terms.

Adams has often been most remembered for signing into law the terrible Alien and Sedition Acts that critics said were designed to stifle Adams’ political opponents. Adams was also the only one of our nation’s first five presidents who was not an enslaver of African people.

Adams’ reputation has enjoyed a well-deserved dusting off over the past several years beginning with David McCullough’s excellent–and Pulitzer Prize winning–biography. Lindi and I recently watched the HBO series based upon McCullough’s book that stars Paul Giamatti and Laura Linney as John and Abigail Adams (available on Netflix).

For a fresh view of Adams, his contemporaries, and the founding of our nation, you can’t do any better than this book and mini-series.