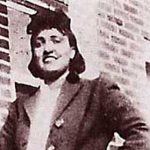 When I was a child in the early 1960’s I received a polio vaccine, as did my sister and most everyone I knew. What I did not know until recently is that the person we have to thank for this gift of the virtual eradication of a horrible disease is a black woman from rural Virginia.

Henrietta Lacks was a poor African American woman, a mother of five, who died of cervical cancer at age 31 in 1951. While being treated for her disease in the “colored ward” at Johns Hopkins in Baltimore, cancerous cells were taken from her cervix without her knowledge. It was not an unusual procedure. It happened–and continues to happen–all the time. What was unusual was what happened with Henrietta’s cells. They became one of the most important breakthroughs in medical history. Unlike all other human cells before that time, Henrietta’s continued to grow–and grow and grow–in culture. They still thrive throughout the world today. If all of Henrietta’s cells–known as HeLa–were added together today they would weigh more than 50 million metric tons.  HeLa cells allowed researchers to develop the polio vaccine, to create great breakthroughs in the understanding and treatment of cancer and many viruses. They helped advance the understanding of in vitro fertilization, cloning, and gene mapping. Billions of Henrietta’s cells have been bought and sold over the past six decades.

Henrietta Lacks, rather than being properly honored for all she has done for medical research, has remained virtually unknown–until now–and is buried in an unmarked grave.

Author Rebecca Skloot has written an amazing book about Henrietta and her family. She has taken this true story of medicine, racism, science, and America over the past six decades and leads readers on an amazing journey. Henrietta’s own family didn’t learn about her “immortality” until more than twenty years after her death. And though her cells contributed to many significant medical breakthroughs, and became a multimillion-dollar industry, her family did not profit one iota. For the most part they could not even afford medical treatment or health insurance themselves. This is a story tied into the sad history of racism, experimentation on African American people,as well as legal battles over who owns our own cells.

The Immortal Life of Henrietta Lacks reads like the most moving of novels. I cannot recommend it highly enough. The challenge I have is which version to recommend. I listened to the unabridged audio book. My wife Lindi read the hardcover. The audio version includes a wonderful interview at the end with the author. The hardcover book includes many photos. Both are wonderful additions to the story. However you choose to take this story in, know that it is a powerful story of racism, science, poverty, despair, spirituality, and hope.

Once I started listening to this story I could not stop. Lindi felt the same way about the book. Whichever version you take in, we believe you will feel the same way.