Peacebuilding in Afghanistan and Pakistan 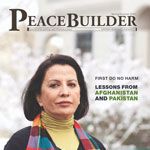 It isn’t often that I become excited enough with a magazine that I want to tell all my friends about it. Today is one of those days. The latest issue of Peacebuilder (Spring/Summer 2010), from the Center for Justice and Peacebuilding at Eastern Mennonite University, focuses entirely on peacemaking efforts in Afghanistan and Pakistan. I literally could not put it down. It is available online here.

I suspect that many of you get as frustrated as I do with traditional media outlets and their focus mostly on war and chaos. There is a lot to cover in that regard in this region of the world. The Taliban this! Al-Qaeda that! More suicide bombers over there!

The United States government continues to pour billions of dollars into military efforts in Afghanistan and Pakistan and almost nothing into development. And what do we see reported on in the media? Follow the money.

What rarely gets covered are the actions of the blessed peacemakers. An exception to this is the success of Greg Mortenson‘s work as described in his wonderful book, Three Cups of Tea, and now Stones Into Schools: Promoting Peace with Books, Not Bombs, in Afghanistan and Pakistan. It was Mortenson and Khaled Hosseini who put a human face on the people of Central Asia for me. But does Mortenson hold sway with the policy-makers in DC as he tries to show how much more successful we would be if we build schools instead of dropping bombs? Hardly.

Almost fifty people based in Afghanistan and Pakistan have studied at the Center for Justice and Peacebuilding at EMU. Many of them contributed to this issue of Peacebuilder.

Learn about the history of Afghanistan and Pakistan, including the roles that outside forces have played. Read the Ten Steps Toward Ending the Chaos. Learn about the program Greg Mortenson considers one of his favorite charities: Help the Afghan Children (HTAC).

The groups that are behind terror in Afghanistan are more frightened about the thought of millions of Afghan children growing up educated than they are of the U.S. Military.–Suraya Sadeed, Director of HTAC.

The path we presently travel in Central Asia will lead to further chaos, death, and generations of harmed people. Only peace will bring order out of the chaos. I’m proud to be connected with a university dedicated to training peacemakers. I hope you’ll read about them today.

Patriot, activist, and folksinger Pete Seeger penned these words about our soldiers back in 1965. Bruce Sprngsteen continues to sing these words:

If you love this land of the free

Bring ’em back from overseas

Mahatma Gandhi said, “There is no way to peace. Peace is the way.