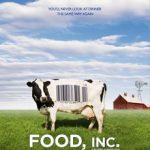 The Oscar-nominated (for Best Documentary Film, 2009) Food, Inc. premieres tonight on the acclaimed PBS series P.O.V. (the same wonderful folks responsible for the television premiere of Traces of the Trade)

I encourage everyone to watch this informative film. I learned things I did not know. I was shocked, angered, and disgusted. And then I began to think about what I could do in my own life to have a more positive impact on my health by the choices I make in what I eat.

Seriously. Skip American Idol. TiVo it. I believe Food, Inc. will impact you and your loved ones in significantly beneficial ways. From the P.O.V. website:

Our nation’s food supply is now controlled by a handful of corporations that often put profit ahead of consumer health, the livelihood of the American farmer, the safety of workers and our own environment. We have bigger-breasted chickens, the perfect pork chop, insecticide-resistant soybean seeds, even tomatoes that won’t go bad, but we also have new strains of E. coli — the harmful bacteria that causes illness for an estimated 73,000 Americans annually. We are riddled with widespread obesity, particularly among children, and an epidemic level of diabetes among adults.

Featuring interviews with such experts as Eric Schlosser (“Fast Food Nation”), Michael Pollan (“The Omnivore’s Dilemma”) along with forward thinking social entrepreneurs like Stonyfield Farms’ Gary Hirschberg and Polyface Farms’ Joel Salatin, Food, Inc. reveals surprising — and often shocking truths — about what we eat, how it’s produced, who we have become as a nation and where we are going from here.

Check your local PBS station for times and repeat screenings. P.O.V. continues to impress me with the wide variety of thought-provoking and informative films it shows each week. If P.O.V. isn’t on your radar screen yet–they should be.

And if you can’t watch tonight an alternative way to see Food, Inc. is on Netflix where it is available both for home delivery and “Instant Watch” on your computer.