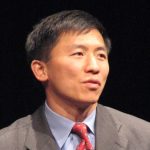 On March 30 I wrote about a “weapon” opponents of Goodwin Liu’s nomination have employed: comments Liu made during a panel discussion on May 6, 2008 that I attended following a screening of Traces of the Trade at the Newseum in Washington, DC.

This is a process I’m going to follow closely.

But this post isn’t a report on those hearings. THIS update is to thank my friend Jennifer Carr of Borderline Media for locating a YouTube video of Liu’s comments from the panel discussion 2 years ago that is just a tad longer than the 2 minute, 18 second clip that opponents were using to claim that Liu supports financial restitution (reparation) for historic slavery.

Watch this 6 minute, 46 second clip for a more accurate contextualization of the discussion of reparations that evening.

As I reported on March 30, if you actually listen to (or read the transcript of) the whole discussion of repair that evening it is clear that Liu believes that each of us has a moral duty to make things right in the United States; to repair the lingering damage from historic oppressions including enslavement, Jim Crow and other forms of discrimination. Until we repair systems (education, housing, employment, health care, criminal justice, etc) so that they become equitable and just for all Americans, the legacy of slavery will continue to both haunt and harm us all.

Count me as being in total agreement with Goodwin Liu on this issue.