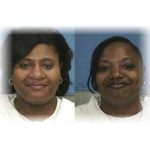 On Christmas Eve in 1993 Jamie and Gladys Scott left a mini-mart near their home in Scott County, Mississippi. Their car broke down. They hitched a ride from two young men, one of whom they knew. Later that evening the two men were robbed at gunpoint by three teenagers in another car. The robbers took an estimated $11 from the two young men. No one was hurt. Police accused the Scott sisters of setting the victims up.

The young women denied any involvement. They had no criminal record. A jury found them guilty of armed robbery. On October 13, 1994, a judge ordered them to each serve double-life sentences in the Central Mississippi Correctional Facility, where they remain today.

Two co-defendants testified against the Scott sisters and served ten-month sentences. They later recanted their testimony and claimed it was given under police pressure.

Complicating things is that Jamie, who is now 38 years old, is suffering from kidney failure and may die without a transplant. The mother of these two women, Evelyn Rasco, says that Jamie’s sister Gladys, age 34, offered to donate her kidney but the Mississippi Department of Corrections won’t allow the procedure.

Do you suppose this has anything to do with race? Can you imagine two young white women being in this situation?

Even if Jamie and Gladys lied and they were involved in this crime in which no one was hurt and netted $11 and the boys who actually held the gun spent 10 months behind bars, how on earth can anyone say it is “just” for Jamie and Gladys to serve two life terms for this crime?

I learned about Jamie and Gladys on Facebook. You can learn more by joining the FB group THE POOR PEOPLE’S CAMPAIGN INC. I encourage my friends to join. I also encourage you to research this situation yourself. Mrs. Rasco maintains an active blog.  Here’s the story of the Scott Sisters on The Grio.

Then spread the word. Raising more awareness about injustice will hopefully make a difference. One thing I believe with absolute certainty. This situation has nothing to do with justice.