Standing up to bigotry (and media/congressional leaders who encourage it) 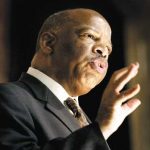 Do these people kiss their mothers with those mouths?

Watching and reading the news, it appears that civil debate is presently almost non-existent in our nation. This isn’t about health care. It’s much deeper than that. This is about fear. I understand the fear; fear of change, fear of the unknown, and fear when people feel so vulnerable for themselves and their families due to the economy, job loss, wars being waged, and so on. But that is no excuse for abusive behavior.

When we stand silently by and not hold the abusers accountable for their behavior we become complicit in the rise of incivility and the potential violence that may follow.  And it isn’t just the citizen “tea baggers” who must be held to account (though well they should be). It is those who hold positions of power within the media and in congress who, by their example, offer these folks fortitude for their public displays of bigotry.

What example was set when Rep. Joe Wilson yelled “You lie!” at President Obama during his speech to a joint session of Congress last September? When Texas Rep. Randy Neugebaure shouted out  “baby killer” during Michigan Rep. Bart Stupak’s testimony during the health care debate? When people like Rush Limbaugh and Glenn Beck foment hatred with their vitriol they incite the worst in people. And how on earth can Rep. Devin Nunes justify the racist and homophobic slurs of the “tea partiers”? But he did. And he bears responsibility for his own words and for encouraging further displays of bigotry.

And when people of good will stand silently by when we witness incivility in our own communities, when we say nothing as angry protesters portray President Obama with racially disparaging posters, we become complicit in this behavior. And as much as I believe the uncivil protesters should be ashamed of themselves and held to account for their actions and the actions they inspire, so should we.

These spectacle are ugly. And they remind me of the 1960’s. Racist segregationists mercilessly beat, and almost murdered, a much younger John Lewis. They did murder four little girls at 16th Street Baptist Church. They murdered Medgar Evers. And the mobs were supported by people in positions of leadership; people like Governor George Wallace and Bull Connor. Yesterday bricks were thrown through the windows at two Democratic Party offices in western New York as well as through a window at Rep. Louis Slaughter’s office in Niagra Falls.

What will happen next? And what can civil people do to help calm the rage?

Our children are watching. And they are inheriting.