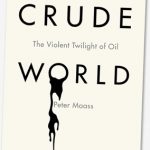 It reads like a Stephen King novel–fast-paced, thrilling, and frightening. The problem is that this isn’t a novel about a rabid dog. It’s the true story of our world-wide addiction to oil, what it has done and continues to do that makes the world less safe, less moral, less sustainable.

This is one of the most important books I’ve read in a long time. Peter Maass, an author and journalist who has written for the Wall Street Journal, New York Times, and Washington Post, among others, details the tremendous damage that the extraction of oil has wrought in countries that possess it.

Evil is not people with mustaches who look like they’re doing bad things. Evil is done by people in suits sitting in boardrooms making horrible decisions. They do it because it’s worth it.

After reading this book you’ll no doubt have strong feelings about the greed of oil companies, corrupt dictatorships, and several powerful governments. What I’ve found most troubling is that I also have to come to terms with my own greed and willing blindness to the impact my addiction to oil has on people and communities throughout the world.

Now the world’s eighth-largest exporter of oil, Nigeria earned more than $400 billion from oil in recent decades, yet nine out of ten citizens live on less than $2 a day and one out of five children dies before his fifth birthday.

Like the system of enslavement 200 years ago, oil today touches every aspect of our worldwide economy. I couldn’t help but notice as I read Crude World that the vast majority of people who suffer from the damage caused by the oil industry are people of color.

Though oil provides fuel for our cars and warmth for our homes, it undermines most countries that possess it and, along with natural gas and coal, poisons the environment.

This is yet another “inconvenient truth” of our modern lives. 200 years ago, white people in the North could oppose slavery in the South while wearing cotton clothing, smoking tobacco, and adding sugar to their coffee. They were silently and indirectly complicit in the preservation and continuation of the system. There are parallels to the oil industry today. Like many northerners in the 19th century, we receive all the benefits of the system without having to listen to the screams of the victims.

When we wake up tomorrow, we will still be dependent on petroleum and complicit in the forms of violence–physical, environmental and cultural–that are the consequences of its extraction.

We will run out of oil within the next few decades. Every legitimate study concludes that oil extraction has peaked. If our addiction to oil does not decrease dramatically, then as extraction slows–which it already has in many places around the world–prices will rise and governments will fail. If you think gasoline is expensive now, just wait 5 or 10 years. We need serious conservation efforts, fuel efficiency, and renewable energy.

The United States is by far the worst offender. It is the world’s largest consumer of energy and the second-largest emitter of greenhouse gases.

We are most complicit in the activities that will prove the undoing of the lifestyle we’ve (some of us, anyway) have grown accustomed to.

We owe it to ourselves and to our grandchildren to read Crude World, understand the implications for our lives and the lives of our fellow humans in other countries, and make some challenging, moral, and sustainable changes in how we live.